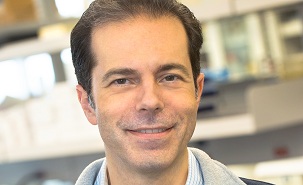 A new technology that reveals cellular gene transcription in greater detail has been developed by Dr. Daniel Kaufmann of the University of Montreal Hospital Research Centre (CRCHUM) and the research team he directed. “This new research tool offers us a more profound view of the immune responses that are involved in a range of diseases, such as HIV infection. At the level of gene transcription, this had been difficult, complex and costly to do with current technologies, such as microscopy,” explained the University of Montreal professor.

The technology is known as the “FISH investigation protocol” (Fluorescent in situ hybridization), it optimises current flow cytometry processes, resulting in a greater visibility of the transcription of RNA, a key step in the transmission of cellular information. The researchers published their breakthrough in Nature Communications' online edition. Flow cytometry itself enables the simultaneous measurement of hundreds of thousands of cells as they quickly pass through laser beams. This technology dates back to 1934, when it was used to count the cells making up organs and blood, before being developed across the decades to enable the analysis of cells' various physical characteristics. Today, flow cyclometers are standard equipment for immunology and cancer research labs.

However, the tool's major barrier was that it could only be used for the study of proteins, as specific antibodies that recognize these molecules make them visible by marking. Unfortunately, there are many proteins for which no specific antibodies are available, and so it has been impossible to study them with flow cytometry. Moreover, cancer, HIV and other diseases are caused by a problem that precedes cells' creation of proteins – the deregulation of the transcription of DNA information to the RNA messenger. Classic flow cytometry cannot examine what is happening during this process.

Dr Kaufmann's team worked with Affymetrix, a company, to break through this barrier by applying their technology to a fundamental step in the transmission of genetic information within the cell. The technology, which is now patented, involves carefully mixing chemical reactants by following a two day long handling protocol. Using a standard flow cyclometer, a hybridization oven and a variety of meticulously dosed solutions (which act as microscopic fluorescent probes), the cells can be coaxed to deliver information that has been previously unavailable.

The application of the technology promises to have a huge impact as ultimately it will enable researchers to better understand the mechanisms that cause diseases and to establish the efficacy of the drugs used to treat them. “In principle, our technology can be applied to any species. We can detect a very wide variety of RNA molecules produced by the human body and animals,” Dr. Kaufmann explained.

This study was financed by the National Institutes of Health in Washington, DC. Dr Daniel Kaufmann received a bourse de carrière from Fonds de recherche du Québec – Santé.  The team he directed included researchers from the Ragon Institute (Boston) and the CRCHUM. The lead author, Dr. Filippos Porichis of the Ragon Institute, led most of the experiments. Affymetrix, a company, also participated in this study. The University of Montreal Hospital (CHUM) and the University of Montreal are known officially as Centre hospitalier de l'Université de Montréal and Université de Montréal, respectively.

To read the study

The University of Montreal Hospital Research Centre (CRCHUM) improves the health of adults through a high-quality academic research continuum which, by improving our understanding of etiological and pathogenic mechanisms, fosters the development, implementation and assessment of new preventive, diagnostic and therapeutic strategies. The CRCHUM provides a training environment to ensure the development of new generations of researchers committed to research excellence. crchum.chumontreal.qc.ca

About the University of Montreal

Officially known as Université de Montréal, the university enjoys an enviable position as a leading research institution both in North America and the French-speaking world. Its role as a hub between these spheres enables it to develop unique and dynamic research networks that are driven by world renowned scientists, drawing collaboration with the globe's most innovative organizations. At a local level, the university is committed to building on the Montreal region's unique strengths in science and technology, encompassing fields such as aerospace engineering, nanoscale chemistry and software design, and has therefore promoted strategic relationships with public and private organizations. www.umontreal.ca