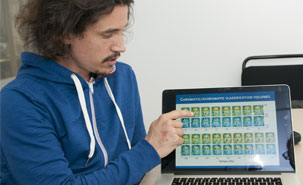 The contrast between lip and skin colour can quickly identify a person's gender, according to researchers at the University of Montreal's Department of Psychology. The brain also analyzes light reflection in the eye area, which provides much information but requires more time to be interpreted. Nicolas Dupuis-Roy and Professor Frédéric Gosselin came to this conclusion by asking 100 participants to guess the gender of 300 people after being shown different parts of their faces

Three hundred full-portrait photographs, of Caucasian faces of both sexes, were collected from the Internet. Some of the women wore make-up, while all the men were clean shaven. No other gender-identifying signs such as clothing or jewellery were visible. “Many studies on the subject are limited in their validity. Some researchers have examined information extraction strategies on non-realistic pictures. Others have determined beforehand the facial areas to be studied or have used only grayscale images,” explained Dupuis-Roy, who took care to avoid these methodological biases. Using the “bubbles” technique, the chromatic (colour) and achromatic (grey tones) content of the pictures was randomly sampled for 200 milliseconds, leaving only a portion of the visual information at a time. This method allowed the researcher to know precisely which facial areas were the most important for the task and when the information was extracted by the brain. As the facial areas were displayed, the 100 observers were simply asked “Is this the face of a man or woman?”

Analysis showed that achromatic information in the eye and eyebrow area and chromatic information in the mouth area were most significant in recognizing face gender. Colour data for the mouth area was quickly isolated by the brain, barely 12 milliseconds after each face was presented! “Information in this area is situated along the red-green chromatic axis,” said Dupuis-Roy. “But contrast between the lips and skin is more pronounced in women than it is in men because their skin colour generally contains less red and therefore more green. This contrast is perceived by our brain as a female characteristic.” 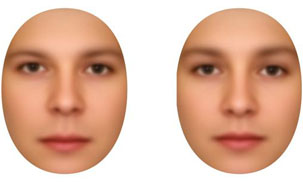 In general, the participants were more efficient in processing colour photographs than they were in processing grayscale ones. According to the researcher, it is likely that “colour facilitates processing by both amplifying low spatial frequency signals and adding more gender information.” Brain performance in the presence of chromatic cues is possibly an adaptive advantage related to natural selection. "Lip redness may be associated with better cardio-respiratory fitness and higher estrogen levels, which is useful information for reproduction," noted Dupuis-Roy. “What happens when chromatic information is not available? The brain still focuses on the mouth, but quickly jumps to the eye area.”

The researcher does not exclude the possibility that other facial areas (especially facial outline, nose, and chin) are used in identifying the sex of a person. But these areas seem to be of secondary importance in terms of gender information and visual representation.

“For many years, scientists believed that the distances between the eyes, eyebrows, nose, and mouth were essential in facial recognition, but most of the studies on the subject had exaggerated these distances,” said Dupuis-Roy. His work has undermined this belief. In other words, wider eyes or greater distance between eyebrows and eyes do not make us appear more female or male. “Interattribute distances based on real-world faces are not critical in determining the sex of person,” he concluded.

Androgynous faces appear more masculine or feminine after the application of slight variations in chromatic or achromatic contrast.

brain psychology Frédéric Gosselin Department of Psychology Faculty of Arts and Sciences
Previous Which artificial pancreas system is the best for children with type 1 diabetes? June 11, 2015
Next Smoking around your toddler could be just as bad as smoking while pregnant June 22, 2015
Share