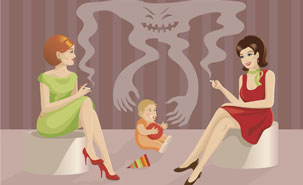 Children whose parents smoked when they were toddlers are likely to have a wider waist and a higher BMI by time they reach ten years of age, reveal researchers at the University of Montreal and its affiliated CHU Sainte Justine Research Centre. “We suspect the statistics we've established linking childhood obesity to exposure to parents' smoking may underestimate the effect due to parents under reporting the amount they smoked out of shame,” explained Professor Linda Pagani, who led the study. “By the age of ten, the children who had been intermittently or continuously exposed to smoke were likely to have waists that were up to three-fifths of an inch wider than their peers. And their BMI scores were likely to be between .48 and .81 points higher. This prospective association is almost as large as the influence of smoking while pregnant.” Worldwide, 40% of children are exposed to secondhand smoke in their own homes.

The study is the first to identify specifically the effect of the smoking. Similar studies have been led in the past, that these have not taken into account other factors in the family that might have influenced the child's weight, such as the parent's mental health and the resulting effects this has on their lifestyle choices. Pagani and her team came to her conclusions by using data collected through the Quebec Longitudinal Study of Child Development, a vast survey of children born across the province to which parents and teachers accept to contribute an array of information about the child's development, wellbeing, lifestyle, social environment and behaviour. These findings were ascertained by comparing the behaviour of 2055 families and the outcomes for their children.

While the increase may not seem like much, it occurs during a critical period of the child's development known as the “adiposity rebound period.” The weight gain could therefore have serious long-lasting effects. Pagani has several explanations as to why there may be a cause and effect relationship in the association she has identified. “

“Early childhood exposure to second hand smoke could be influencing endocrine imbalances and altering neurodevelopmental functioning at this critical period in hypothalamic development, thus damaging vital systems which undergo important postnatal growth and development until middle childhood, i.e. the period that we've looked at in this study,” she said. “The mechanisms by which household smoke negatively influences immune, neurodevelopmental, and cardiovascular processes are multiple and transactional. For example, young children have ventilation needs per kilogram of body weight that are approximately 2 to 3 times higher than adults due to their immature vital systems, resulting in more noxious effects given equal levels of household smoke exposure compared to adults. In any event, our findings emphasize the importance public health initiatives and parental sensitization aimed at domestic exposure reductions during the critical early childhood years.”

Linda Pagani, PhD, A.K. Danny Nguyen, and Caroline Fitzpatrick, PhD, published “Prospective associations between early long-term household tobacco smoke exposure and subsequent indicators of metabolic risk at age 10” in Nicotine and Tobacco Research, an Oxford Journal. Professor Linda Pagani is Full Professor at the School of Psycho-Education of the University of Montreal and Researcher at the CHU Sainte Justine Hospital Research Centre. The University of Montreal is officially known as Université de Montréal.