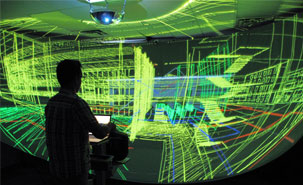 Researchers at the University of Montreal have developed techniques that enable computer cursors to interact in 3D in single or multiuser, local or remote collaboration scenarios. The system, unveiled today at the SIGGRAPH 2015 Conference in Los Angeles, is not so much about turning Word into an IMAX experience as offering designers an opportunity to navigate through and modify their creations manipulating 3D objects with 3D interactions.

“Our new technology challenges the notion of what a cursor is and does,” explained lead researcher Professor Tomás Dorta, of the university's School of Design. “The cursor becomes a drawing and controlling plane". The techniques we're unveiling today involves using a tablet to control the cursor, but as it does not necessarily rely on external tracking of the user's movements, eventually other devices could be used, such as smart phones or watches.” 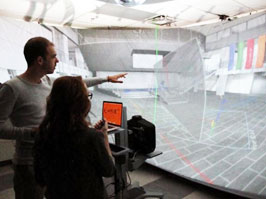 What does control plane mean? “We use a Butterfly-net analogy to explain how the cursor selects objects in space – the users simply sweep the 3D cursors through,” Dorta said. “For the manipulations of objects, the users can use gestures and movements such as pinching and orientation.” The cursor is in fact being demonstrated within the researchers' Hyve-3D design system, a full scale immersive 3D environment that enables users to create drawings on hand-held tablets, which can then be manipulated on the tablets to create a 3D design within the space. As the designers are immersed in their work, for example designing a living room, they can test different furniture options according to the scale and even work on the interior detailing.The immersive images are the result of an optical illusion created by a high-resolution projector, a specially designed 5m-diameter spherically concave fabric screen and a dome mirror projecting the image onto the screen. Specialized techniques render the 3D scene onto a spherical projection in real-time

Univalor, the university's technology commercialization unit, is supporting the market launch of the Hyve-3D system and the 3D cursor, via the startup Hybridlab Inc. Several patents are pending. “Beyond its utility for sketching, we believe the 3D cursor has applications in a wide range of fields,such as architectural design, medical imaging and of course computer games. This isn't a gimmicky rebirth of the cursor, it's about rethinking how humans interact with computers as part of the creative process,” Dorta said. 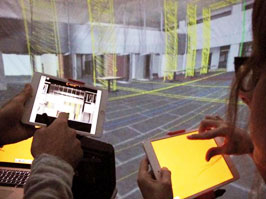 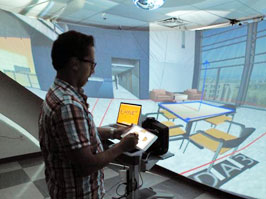 Tomás Dorta is available for interview in English, French and Spanish. The University of Montreal is officially known as Université de Montréal.

SIGGRAPH 2015 will bring thousands of computer graphics and interactive technology professionals from six continents to Los Angeles for the industry's most respected technical and creative programs focusing on research, science, art, animation, music, gaming, interactivity, education, and the web from August 9-13, 2015, at the Los Angeles Convention Centre. SIGGRAPH 2015 includes a three-day exhibition of products and services from the computer graphics and interactive marketplace from 11-13 August 2014. More details are available at the SIGGRAPH 2015 website or on Facebook and Twitter.

Tomás Dorta has a background as a practitioner architect and designer. His research interests include the design process and co-design using new technologies and the development of new techniques and devices of design in the virtual realm. He obtained his Ph.D. (2001), studying the impact of virtual reality as a visualization tool into the design process. His research has been extensively funded by Canadian's federal and provincial research grant institutes and published and presented in several international scientific conferences as well as scientific journals. As a design educator, Tomás Dorta joined the School of Design of Université de Montréal in 2003 where he is now associate professor. He teaches design research and computer graphics courses and industrial design studios related to new technologies, design collaboration and bionics. Tomás Dorta is the director of the Design research laboratory, Hybridlab (hybridlab.umontreal.ca) and the principal designer of Hyve-3D and co-founder and CEO of Hybridlab Inc (hyve3d.com).