51 Eridani b is the first exoplanet discovered by the Gemini Planet Imager. It is a million times fainter than its star. 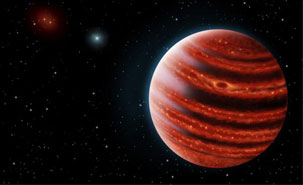 A Jupiter-like planet within a young system that could help decode how planets formed around our Sun has been discovered by a team of astronomers from the University of Montreal's Institute of Research on Exoplanets (iREx). They collaborated with an international team of astronomers led by professor Bruce MacInstosh from Stanford University.

One of the best ways to learn how our solar system evolved is in fact to look to younger star systems in the early stages of development.

The new planet, called 51 Eridani b, is the first exoplanet to be discovered by the Gemini Planet Imager, a new instrument operated by an international collaboration headed by Bruce Macintosh, a professor of physics in the Kavli Institute at Stanford. It is a million times fainter than its star and shows the strongest methane signature ever detected on an alien planet, which should yield additional clues as to how the planet formed.

The results are published in the current issue of Science.

A clear line of sight

The Gemini Planet Imager (GPI) was designed specifically for discovering and analyzing faint, young planets orbiting bright stars. NASA's Kepler mission indirectly discovers planets by the loss of starlight when a planet blocks a star. 'To detect planets, Kepler sees their shadow; GPI sees their glow,' said Macintosh. What GPI does is referred to as direct imaging. The astronomers use adaptive optics to sharpen the image of a star, and then block out the starlight. Any remaining incoming light is then analyzed, the brightest spots indicating a possible planet.

“The GPI instrument, an international collaborative effort, has an eagle eye designed to detect and to image  exoplanets,” says René Doyon, professor at the Physics Department of the University of Montreal and director of iREx, whose collaboration with the laboratory infrared University of California at Los Angeles, Laval University, the Observatoire du Mont-Mégantic, the Institut National d'Optques (INO) helped develop, build and test the optics of GPI. 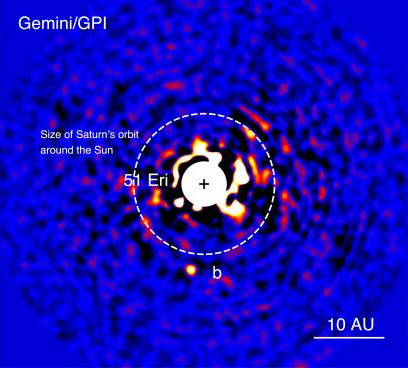 After GPI was installed on the 8-meter Gemini South Telescope in Chile, the team set out to look for planets orbiting young stars. They've looked at almost a hundred stars so far. “This is exactly the kind of planet we envisioned discovering when we designed GPI”, says James Graham, professor at UC Berkeley and Project Scientist for GPI.

As far as the cosmic clock is concerned, 51 Eridani is young – only 20 million old - and this is exactly what made the direct detection of the planet possible. When planets coalesce, material falling into the planet releases energy and heats it up.  Over the next hundred millions years they radiate that energy away, mostly as infrared light.

Once the astronomers zeroed in on the star, they blocked its light and spotted 51 Eri b orbiting a little farther away from its parent star than Saturn does from the sun. The light from the planet is very faint – more than one million times fainter than it star – but GPI can see it clearly. Observations revealed that it is roughly twice the mass of Jupiter. Other directly-imaged planets are five times the mass of Jupiter or more.

In addition to being the lowest-mass planet ever imaged, it's also one of the coldest – 400 degrees Celsius, whereas others are around 650oC – and features the strongest atmospheric methane signal on record. Previous Jupiter-like exoplanets have shown only faint traces of methane, far different from the heavy methane atmospheres of the gas giants in our solar system.

All of these characteristics, the researchers say, point to a planet that is very much what models suggest Jupiter was like in its infancy.

“Many of the exoplanets astronomers have studied before have atmospheres that look like very cool stars" said Macintosh. "This one looks like a planet."

All these discoveries are all signs that prove that exoplanets would be a copy of the planet Jupiter, but taken in a relatively early period of its history. “ This is the first time that we directly detected an exoplanet whose atmosphere and distance to its star is similar to that of the giant planets of our own system,” says Julien Rameau, researcher at iREx and UdeM.

The key to the solar system?

In addition to expanding the universe of known planets, GPI will provide clues as to how solar systems form. Astronomers believe that the gas giants in our solar system formed by building up a large, core over a few million years and then pulling in a huge amount of hydrogen and other gasses to form an atmosphere.

But the Jupiter-like exoplanets that have so far been discovered are much hotter than models have predicted, hinting that they could have formed much faster as material collapses quickly to make a very hot planet. This is an important difference. The core-buildup process can also form rocky planets like the Earth; a fast and hot collapse might only make giant gassy planets. 51 Eridani b is young enough that it ‘remembers' its formation.

"51 Eri b is the first one that's cold enough and close enough to the star that it could have indeed formed right where it is the 'old-fashioned way,'" Macintosh said. "This planet really could have formed the same way Jupiter did - this whole planetary system could be a lot like ours."

There are hundreds of planets a little bigger than Earth out there, Macintosh said, but there is so far no way to know if they are really "super-Earths" or just micro-sized gas and ice planets like Neptune or something different all together. Using GPI to study more young solar systems such as 51 Eridani, he said, will help astronomers understand the formation of our neighbor planets, and how common that planet-forming mechanism is throughout the universe.

Simulated fly-by of the 51 Eridani star and planet system

GPI is an international project led by the Lawrence Livermore National Laboratory (LLNL) under Gemini's supervision, with Bruce Macintosh as Principal Investigator and LLNL engineer David Palmer as project manager. Scientists at the American Museum of Natural History, led by Ben Oppenheimer, designed special masks that are part of the instrument's coronagraph which blocks the bright starlight that can obscure faint planets. Engineer Kent Wallace and a team from NASA's Jet Propulsion Laboratory constructed an ultra-precise infrared wavefront sensor to measure small distortions in starlight that might mask a planet.

A team at the University of California Los Angeles' Infrared Laboratory, under the supervision of Professor James Larkin, together with Rene Doyon director of the Observatoire du Mont-Mégantic (OMM), professor at the Department of physics at University of Montreal (UdeM) and Simon Thibault professor at Université Laval (UL) developed the infrared spectrograph that dissects the light from planets.   Immervision (Montreal) led the fabrication of the cryogenic optical train in close collaboration with INO (Québec) and the OMM personnel.

Data analysis software written at the UdeM, the Dunlap Institute in Toronto and the Space Telescope Science Institute assembles the raw spectrograph data into three-dimensional cubes.

NRC Herzberg in British Columbia Canada, built the mechanical structure and software that knits all the pieces together. James R. Graham, as project scientist, led the definition of the instrument's capabilities. The instrument underwent extensive testing in a laboratory at the University of California Santa Cruz before shipping to Chile in August.  The SETI institute in California manages GPI's data and communications.

Français
Previous Overreliance on imagination may be a sign of obsessive-compulsive disorder August 13, 2015
Next Profs Beaulieu and Kaczorowski are pioneers of family medicine August 18, 2015
Share