Researchers highlight the important role of inferential confusion and dissociative experiences, which are signs that best predict OCD symptoms. 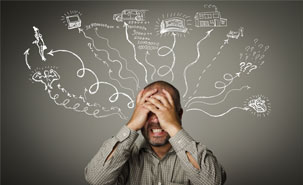 Confusing reality with imagination and losing contact with reality are two key characteristics that could play a role in the development of obsessive-compulsive disorder (OCD).

This is what we learn from a study conducted by researchers at the CIUSSS de l'Est-de-l'Île-de-Montréal (Institut universitaire en santé mentale de Montréal) and the University of Montreal, the results of which were published in the Journal of Clinical Psychology.

“In general, researchers agree on the diagnostic criteria of OCD. However, there is no consensus on the mechanisms underlying them,” said Frederick Aardema, co-director of the Obsessive-Compulsive and Tic Disorder Studies Centre (CETOCT).

Already in 2011, the CETOCT team had observed that people who rely heavily on their imagination and have a strong tendency to dissociate from reality had more obsessive symptoms. The aim of the study was to confirm these observations in a population with OCD.

“Theories about OCD stipulate that it is not the content of thought that is involved in the development of obsessions but the way these thoughts are interpreted by the person,” added Aardema, assistant professor in the University of Montreal's Department of Psychiatry. “While most people will dismiss an idea if they feel it has no meaning, people with OCD will say that if they think that way they must be a reason”

“First, inferential confusion is a reasoning process in which obsessive doubt takes hold. Individuals make subjective connections between different elements,” explained Stella-Marie Paradisis, a doctoral student in psychology at the University of Montreal and lead author of the study. “For example, the person believes that the water in a municipal swimming pool is contaminated because chlorine has been put into it, so inevitably there are bacteria in the water. Second, schizotypical personality is characterized by bizarre ideas, rigid belief, lack of discernment, and a tendency to overrely on imagination. For example, individuals are convinced that what they hear on the news or read in the newspaper concerns them personally and directly. Finally, dissociation is characterized by loss of contact with reality and memory lapses in certain situations – a phenomenon that can be observed especially in people who display checking behaviour. Some people feel that they can behave so differently depending on the situation that they are two different people.”

The results of the CETOCT team highlight the important role of inferential confusion and dissociative experiences, which are signs that best predict OCD symptoms. “It seems that people with OCD are so absorbed by their obsession due to inferential confusion that there is a break with reality,” explained Professor Aardema. “Specifically, we found that individuals no longer rely on their sensory perceptions or common sense but on their imagination. For example, they are afraid that their hands are contaminated with germs, so they wash them over and over again because they are convinced that their hands are dirty even though they are visibly clean,” concluded the researcher.

Other factors such as anxiety and depressive symptoms, schizotypal personality, and obsessive beliefs do not seem to play a significant role in the development of OCD symptoms but in the severity of the disorder.

According to several studies and an important meta-analysis (Bloch, Landeros-Weisenberger, Rosario, Pittenger,& Leckman,2008), OCD symptoms can be categorized into five areas:

Frederick Aardema is a researcher at Institut universitaire en santé mentale de Montréal (CIUSSS de l'Est-de-l'Île-de-Montréal), co-director of the Obsessive-Compulsive and Tic Disorder Studies Centre (CETOCT), and assistant professor in the Department of Psychology at the University of Montreal.

Kevin D. Wu is a researcher in the Department of Psychology at the University of Northern Illinois.