Electrochemical test's sensing principle may be generalized to many different targets, leading to inexpensive devices that could detect dozens of disease markers in less than 5 minutes.

Chemists at the University of Montreal used DNA molecules to developed rapid, inexpensive medical diagnostic tests that take only a few minutes to perform. Their findings, which will officially be published tomorrow in the Journal of the American Chemical Society, may aid efforts to build point-of-care devices for quick medical diagnosis of various diseases ranging from cancer, allergies, autoimmune diseases, sexually transmitted diseases (STDs), and many others.

The new technology may also drastically impact global health, due to its potential low cost and easiness of use, according to the research team. The rapid and easy-to-use diagnostic tests are made of DNA and use one of the simplest force in chemistry, steric effects – a repulsion force that arises when atoms are brought too close together – to detect a wide array of protein markers that are linked to various diseases.

The design was created by Alexis Vallée-Bélisle's research group. Vallée-Bélisle is a professor at the university's Department of Chemistry. “Despite the power of current diagnostic tests, a significant limitation is that they still require complex laboratory procedures. Patients typically must wait for days or even weeks to receive the results of their blood tests," he said. "The blood sample has to be transported to a centralized lab, its content analyzed by trained personnel, and the results sent back to the doctor's office. If we can move testing to the point of care, or even at home, it would eliminates the lag time between testing and treatment, which would enhance the effectiveness of medical interventions.”

The key breakthrough underlying this new technology came by chance. "While working on the first generation of these DNA-base tests, we realized that proteins, despite their small size (typically 1000 times smaller than a human hair) are big enough to run into each other and create steric effect (or traffic) at the surface of a sensor, which drastically reduced the signal of our tests," said Sahar Mahshid, postdoctoral scholar at the University of Montreal and first author of the study. "Instead of having to fight this basic repulsion effect, we instead decided to embrace this force and build a novel signaling mechanism, which detects steric effects when a protein marker binds to the DNA test."

The sensing principle is straightforward: the diagnostically relevant protein (green or red), if present, binds to an electro-active DNA strand, and limits the ability of this DNA to hybridize to its complementary strand located on the surface of a gold electrode. Francesco Ricci, a professor at University of Rome Tor Vergata who also participated in this study, explains that this novel signaling mechanism produces sufficient change in current to be measured using inexpensive electronics similar to those in the home glucose test meter used by diabetics to check their blood sugar. Using this highly selective and sensitive DNA-based assay, the researchers were able to detect multiple protein markers directly in whole blood in fewer than 10 minutes, even if their concentration is 1,000 000 times less concentrated than glucose. "A great advantage of this DNA-based electrochemical test is that its sensing principle can be generalized to many different targets, allowing us to build inexpensive devices that could detect dozens of disease markers in less than five minutes in the doctor's office or even at home," Vallée-Bélisle concluded.

Univalor, the university's commercial partner, strongly supports this project and has filed a patent application to protect the technology. “We are convinced that this rapid and easily multiplexed biosensor could significantly improve patient’s health by providing new point-of-care diagnostics for a wide variety of diseases," said Patricia Escoffier, Project Manager at Univalor. Many other applications are envisaged, including pathogen detection in food or water and therapeutic drug monitoring at home, a feature which could drastically improve the efficient of various class of drugs and treatments.

Vallée-Bélisle and his colleagues will publish the final version of “A highly selective electrochemical DNA-based sensor that employs steric hindrance effects to detect proteins directly in whole blood” in the Journal of the American Chemical Society on September 24, 2015. (DOI:10.1021/jacs.5b04942)

This work was funded by the Grand Challenges Canada, the Fonds de recherche du Québec - Santé and the Canada Research Chair in Bioengineering and Bio-nanotechnology.

Professor Alexis Vallée-Bélisle of the University of Montreal and his colleagues have built an inexpensive, portable sensor that enables fast and easy detection of multiple diagnostically relevant proteins (in fewer than 10 minutes.) The sensing principle is straightforward: the diagnostically relevant protein (green or red), if present, binds to an electro-active DNA strand and limits the ability of this DNA to hybridize to its complementary strand located on the surface of a gold electrode. This causes a reduction of electrochemical signal, which can be easily measured using inexpensive devices similar to those used in the home glucose self-test meter. Using this sensor, the researchers were able to detect several proteins directly in whole blood in less than ten minutes.

TERMS OF USE: Unless otherwise noted, images for download on Université de Montréal's news website are made available to the media, non-profit organisations and the general public under a Creative Commons Attribution-ShareAlike license. Images must be credited "Université de Montréal." 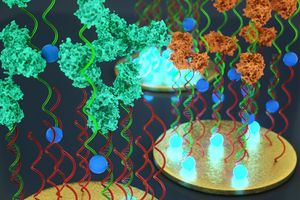