Repeating in one's head without gesturing is the least effective way to recall information.

Repeating aloud boosts verbal memory, especially when you do it while addressing another person, says Professor Victor Boucher of the University of Montreal's Department of Linguistics and Translation. His findings are the result of a study that will be published in the next edition of Consciousness and Cognition. "We knew that repeating aloud was good for memory, but this is the first study to show that if it is done in a context of communication, the effect is greater in terms of information recall,” Boucher explained.

To demonstrate this, Boucher and Alexis Lafleur asked 44 French-speaking university students to read a series of lexemes on a screen. A lexeme is a word such as it is found in a dictionary. During the task, the participants wore headphones that emitted "white noise" to mask their own voices and eliminate auditory feedback. The subjects were submitted to four experimental conditions: repeating in their head, repeating silently while moving their lips, repeating aloud while looking at the screen, and finally, repeating aloud while addressing someone. After a distraction task, they were asked to identify the lexemes they recalled having said from a list that included lexemes not used in the test.

The results show a clear difference when the exercise was performed aloud in the presence of someone else, even though the participants had heard absolutely nothing. Repeating in one's head without gesturing was the least effective way to recall information. “The simple fact of articulating without making a sound creates a sensorimotor link that increases our ability to remember, but if it is related to the functionality of speech, we remember even more,” Boucher said.

Previous studies conducted at Professor Boucher's Phonetic Sciences Laboratory have shown that when we articulate a sound, we create a sensory and motor reference in our brain, by moving our mouth and feeling our vocal chords vibrate. “The production of one or more sensory aspects allows for more efficient recall of the verbal element. But the added effect of talking to someone shows that in addition to the sensorimotor aspects related to verbal expression, the brain refers to the multisensory information associated with the communication episode,” Boucher explained. “The result is that the information is better retained in memory.” 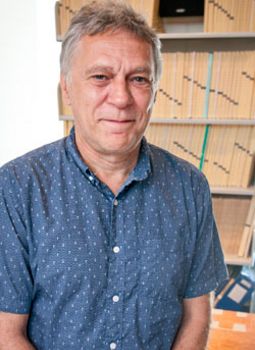 Professor Victor Boucher has been buildling links between his field of study and neuroscience for many years.

Evoking one's memory of sensory episodes is in part the phenomenon to which French writer Marcel Proust alluded when he referred to “the madeleines of his childhood.” The texture and flavour of these little cakes rekindled in him an emotional connection that reminded him of his mother. But what do we keep in memory? How does episodic and multisensory memory work? These questions are at the heart of Professor Boucher's work. Challenging the formal approaches in linguistics, particularly the analysis of spoken language through writing, he has endeavoured for several years to build bridges between his discipline and neuroscience.

Lafleur, a former student who is now a doctoral student in neuropsychology, and Boucher conducted another experiment. “This time, we used sequences of syllables that do not form lexemes in French, i.e., non-words,” said the professor. As the researchers expected, their data showed no difference between the various experimental conditions. Subjects did not recall the sequences of “non-words” any better – whether they produced them aloud, silently, or when speaking to someone.  According to the professor, the fact that the information cannot be grafted to verbal elements in memory and involving a sensory reference explains the absence of effects between the conditions of production. “The results of our research confirm the importance of motor sensory experiences in memory retention and help to better define sensory episodes associated with verbal expression," Boucher concluded.

Alexis Lafleur, Victor J. Boucher, The ecology of self-monitoring effects on memory of verbal productions: Does speaking to someone make a difference?, Consciousness and Cognition, Volume 36, November 2015. DOI: 10.1016/j.concog.2015.06.015.

Français
Previous Why do people vote strategically, and for whom? October 1, 2015
Next Trottier Foundation donates $1 million towards search for extraterrestrial life October 7, 2015
Share