For her master's degree in sociology, UdeM student Sophie Dumont got up close and personal with activists of the radical Femen movement. 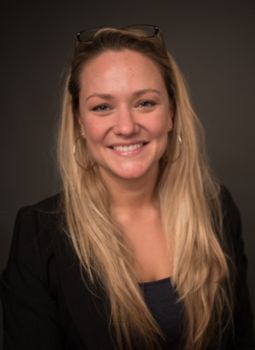 On June 4, 2015, two topless women crashed an event at the Grand Prix of Canada, shouting the message “Montreal is not a brothel.” In the spirit of a feminist group founded in Ukraine in 2008, Rocio Valencia and Neda Topaloski were protesting the sexual exploitation of women, denounced on their Facebook page as “a huge industry in Montreal,” which reaches a peak during the Grand Prix. Their telltale flower crowns left no doubt: these were the women of Femen!

The first activist was quickly overpowered, but her fellow protester managed to climb onto a race car on display and drape herself over it before being forcibly removed and dragged across the pavement by security guards. Videos of the incident were entered as evidence in a trial that recently took place at the Municipal Court of Montreal.

“This is definitely one of the most highly publicized actions by the Quebec chapter of the activist feminist group Femen,” explains Sophie Dumont, who holds a master’s degree in sociology from Université de Montréal. “But despite all the attention, little mention was made of the reasons behind their protest. Instead, they were mainly criticized for using their nudity as a weapon of protest.”

Fascinated by Femen ever since three members of the group disrupted proceedings in the Blue Chamber of the National Assembly in Quebec City in 2013, the 28-year-old student decided to make the group the focus of her master’s thesis, entitled “Regards sur le mouvement Femen, ses actions et ses paradoxes.” Written under the direction of professor Marianne Kempeneers, her ethnographic research project adopts a feminist perspective. It was selected among the best master’s theses of the year by the Faculty of Arts and Science.

The interview with the student took place a week after the trial of Femen member Neda Topaloski, who was found guilty of disturbing the peace. Initial charges of committing an indecent act and exhibitionism had been withdrawn earlier. What does this verdict mean?

Though the guilty verdict was not known at the time Sophie Dumont was preparing her thesis, the student wrote that “this trial raises the issue of putting limits on the freedom of women to use their body as a tool of protest.” In this regard, she quoted Éloïse Bouton, author of Confession d’une ex-Femen, published by Éditions du Moment in 2015: “Whenever a woman’s body is at stake, reasoning is derailed. The only thing that remains is that pair of naked breasts, without discourse, because her nudity annihilates her words.”

Of course, the Municipal Court has its own “version of the facts,” which is far removed from the fundamental issues underlying Femen’s actions. “Femen protests against dictatorships, religious institutions and the sex industry,” explains Sophie Dumont. The fact that they use their body to express political positions is seen as being effective by some, but it is also highly controversial. “Despite being considered ingenious by three leading figures of the MLF [Mouvement de libération des femmes], namely Maya Surduts of the Collectif Droits des femmes, the sociologist Liliane Kandel and the historian Christine Fauré, "sextremism" does not appear to have unanimous support within the feminist community,” according to Sophie Dumont.

Femen has been labelled anti-feminist and accused of promoting pornography and the objectification of women’s bodies through its shock tactics. The movement’s popularity has grown since its members started disrobing. But, Ms. Dumont asks, do people really listen to them? Is people’s enthusiasm really driven by the message Femen is trying to convey? She doubts that the message is getting across and being clearly understood.

Our breasts, our weapons

The student readily admits that she was often tempted to change her thesis topic. “The legitimacy of Femen’s tactics and their ideology were so controversial that I questioned my choice several times,” she says. “Femen is a movement that bills itself as an amplified expression of many contradictions present in our society and that’s how I treat it in my thesis.”

The conceptual framework of Sophie Dumont’s study is informed by interviews with members of Femen’s Quebec chapter, including its founder, Kseniya Chernyshova, as well as an analysis of publications and documentaries on Femen out of Ukraine and France, email and Facebook conversations with Quebec militants, and observations of group meetings in Quebec. As part of her research, she even participated topless in a Femen “training session” in a field near an abandoned factory in Montreal’s east end. Her thesis explores the concept of nude protest, the role of the image in contemporary society as well as notions of appearance and beauty.

She was initially surprised to discover that there are very few empirical studies on this recent activist movement. “In fact, Femen Quebec is the only active chapter of the movement in North America, and since it has no chapters in any other province, it actually represents all of Canada,” Ms. Dumont points out.

Her research reveals that Femen’s Quebec branch differs from its French counterpart in its expression of feminism. “One of the main criticisms of Femen relates directly to the physical appearance of its militants, who are accused of conforming to certain standards of beauty,” explains Sophie Dumont. “Appearance is an important factor for French activists. But what I’ve observed on the ground here in Quebec is that most of the group’s members do not fit the standards of beauty that Femen is accused of perpetuating. The diversity of bodies and appearances is respected, and even promoted, here.”

Another interesting point highlighted by her study is that society generally tends to judge the physical appearance of the activists, regardless of whether or not they are attractive, despite the fact that they are using their bodies to make a political statement. “Even today, both in France and Quebec, women’s bodies are perceived and interpreted in terms of the “body as object” rather than the “body as subject”,” she explains. In Ms. Dumont’s view, despite the collective unease with Femen’s tactics and the occasional lack of a coherent message, the movement nonetheless succeeds in meeting some of its objectives.

Ultimately, according to the researcher, Femen’s actions are judged by a society fascinated with image and spectacle – a society that appraises bodies based on stereotypical standards of beauty and in which religion and politics are deeply intertwined. “All these contradictions serve to blur the lines of protest even more,” Sophie Dumont says. “It is out of these contradictions that Femen was born and it is this multi-faceted society that it is talking to us about,” she concludes.