The largest whole-genome sequencing study on epilepsy was led by Dr. Jacques Michaud of CHU Sainte-Justine.

Approximately 30 per cent of patients with epilepsy do not respond to anti-epileptic drugs. In these cases, all neurologists can do is attempt to find the right combination of medication through trial and error. A treatment that could target the root cause of epilepsy is a beacon of hope for these patients. But identifying the cause of the pathology is no easy feat. “There are many genes involved,” said Jacques Michaud, pediatrician at CHU Sainte-Justine and Professor of Pediatrics and Neuroscience at the Faculty of Medicine of Université de Montréal. “Each child can have different genetic mutations. Often the clinical symptoms do not clearly reflect the cause of epilepsy, which makes choosing the right treatment more difficult.”

A recent study by Michaud examining 200 children with epileptic encephalopathy – epilepsy combined with intellectual or overall developmental disability – and their parents could lead to the development of a more rational anti-epileptic treatment strategy. This extensive research project was piloted by Michaud and his colleagues, Elsa Rossignol and Patrick Cossette of Université de Montréal and Berge Minassian of the University of Toronto. The team identified eight new genes involved in this type of epilepsy thanks to their use of whole-genome sequencing, which had never been done before in an epileptic study of this scope. The results of their study were recently published in the American Journal of Human Genetics. “By learning about the pathophysiology of the genes involved, we hope to move towards a more appropriate treatment and decrease the amount of time spent on cumbersome medical assessments,” said Michaud.

This discovery has had further-reaching implications. The findings not only validate the systematic approach to whole-genome sequencing in clinics, they also demonstrate that de novo mutations, otherwise known as spontaneous mutations not inherited by parents, are the main cause of this severe type of epilepsy. “We were able to identify the specific genetic change that led to epileptic encephalopathy in 32 per cent of our subjects, which is quite remarkable," said Michaud. "These children underwent extensive medical assessments, but no one could find the main cause. If we had conducted this analysis earlier, before all the medical tests were performed, it is possible the yield would have been even greater."

A collective effort on an international scale 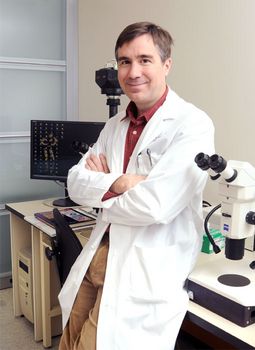 Michaud, who holds the Jeanne and Jean-Louis Lévesque Research Chair on the genetic basis of brain diseases and the Jonathan Bouchard Research Chair on intellectual disability, believes that using whole-genome sequencing in a clinical setting has added value compared to the more conventional approach based on the exome, which represents less than 2 per cent of the genome. “Thanks to whole-genome sequencing, we were able to identify a larger number of mutations," he said. "In the future, the development of new methods for analyzing whole-genome sequencing data will make it possible to improve diagnostic performance."

This scientific breakthrough was made possible thanks to the collective efforts of more than 100 researchers from around the world. “We developed a network of collaborators in the United Kingdom, in several other European countries and in Australia to identify 30 other children with mutations in the same genes," said Michaud. "This is how we were able to validate our findings.”

Knowledge of these mechanisms of action is crucial for the development of personalized epilepsy treatments. However, much more work is needed before these treatments can be harmonized with patients’ genetic profiles.

The study “High rate of recurrent de novo mutations in developmental and epileptic encephalopathies” was published online in the American Journal of Human Genetics on November 2, 2017. This study was funded by Genome Canada, Génome Quebec and the Jeanne and Jean-Louis Lévesque Research Chair on the genetic basis of brain diseases.

Français
Previous Montreal Declaration for a Responsible Development of Artificial Intelligence November 3, 2017
Next From the labs to the Habs November 10, 2017
Share