It's not just the economy that counts, say the UdeM political scientists behind a new tool for ranking the development of Africa's 54 nations.

Africa is more than the sum of its national economies. It's a continent of political systems and social programs, of institutions and infrastructure, environmental policies and health services. How do they all add up, and to what degree does each country's combination of attributes and failings classify it as an "emerging" nation or not?

To answer those questions, two political scientists at Université de Montreal – Mamoudou Gazibo, from Niger, and Olivier Mbabia, from Cameroon – have published a comprehensive performance index of Africa's 54 countries, seeing how they stack up in four areas of development: political, economic, societal and human.

In each, the researchers have looked at five or six sub-categories – things like levels of democratic stability, GDP growth, literacy rates, women's roles and life expectancy. 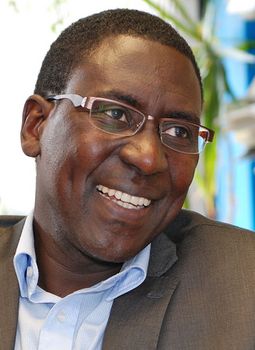 Mamoudou Gazibo, political science professor at UdeM and co-author of the 2017 Index of African Emergence.

At the same time, the academics have launched the Observatory of Emergence in Africa (OBEMA), a new branch of the CERIUM's Pôle de recherche sur l'Afrique et le monde émergent.

The 54-page index, which will be updated every year but for now is only available in French (an English translation is forthcoming), is intended as a useful tool for decision-makers in Africa and internationally.

"We want to draw lessons and provide indicators so that policies can be developed that are rational and comprehensive – in a word, pointing decision-makers in the right direction," said Gazibo, a professor in UdeM's political science department. "Besides being a practical tool, the index can also help fuel fundamental research on things such as the democratic process and governance."

Growth for society and people

What is emergence, exactly?

"It's a process whereby the dynamic of economic growth in a given country translates into benefits for society and people, in the context of stable and I would even say democratically stable institutions – in this sense, emergence in Africa is different than what you see in Asia, by comparison," Gazibo said.

"Singapore, South Korea, Taiwan, China – all have emerged under authoritarian governments. But in Africa there has been such instability – coups d'état, revolutions, civil war – that governments there are now hungry for democracy and good governance. Emergence can't happen – or at least, won't last – if thay desire isn't appeased."

The process of emergence can be a rocky road, however.

"When the economy of a country grows, a  number of inequalities also develop," Gazibo said. "Look at Equatorial Guinea, for example. It's a very authoritarian country which is rich in resources but where wealth is not at all evenly distributed, is in fact concentrated in the hands of one family. It ranks very low on our index, 47th out of 54."

Even more reason, then, to have clear indicators of what emergence means for all levels of society, across all sectors – an index, in other words. Those with the most positive indicators rank high (the top three are Mauritius, South Africa and the Seychelles) and those with the least rank lowest (Chad, South Sudan and Somalia).

"You remember that old campaign slogan of Bill Clinton's in 1992: "It's the economy, stupid'? Well, in Africa, things aren't that simple," Gazibo said.

"You can't see emergence just in terms of economic performance, as many do today. Growth is multi-dimensional, Yes, the economy counts for a lot – there's no development without it – but it has to translate into real benefits for all."