Scientists make breakthrough in the fight against a disease which, in just 10 years, has grown from affecting one in 10 Canadians to one in four.

UdeM professor Naglaa Shoukry and her team of immunologists at the University of Montreal Hospital Research Center (CRCHUM) have made a significant breakthrough in their research aiming to limit the progression of liver disease.

They have characterized the mechanisms of action of type 3 inflammatory cytokines that are produced by the cells of the immune system, which result in a progression of hepatic scarring known as fibrosis.

These research efforts, published today in Science Immunology, have identified new potential targets to inhibit the progression of liver disease and prevent cancer.

Shoukry and her team from the CRCHUM's liver immunology research unit have discovered how a protein called interleukin 22 (IL-22) accelerates fibrosis during episodes of chronic hepatitis by amplifying the signal of the fibrogenic cytokine TGF-β. The fibrogenic nature of IL-22 had been unknown up to now. The new finding allows researchers to understand its interaction when combined with TGF-β, a cytokine that is produced during liver inflammation. Indeed, cases of advanced fibrosis confirm the pathogenic aspect of IL-22.

Another type 3 cytokine, namely interleukin 17A (IL-17A), had been known as an agent amplifying the inflammation and fibrosis leading to liver cirrhosis, which can cause cancer. The CRCHUM team has identified neutrophils and mast cells as the prime source of IL-17A in humans. Indeed, their number increases in inflammation induced by the immune system during liver disease.

It appears now that two type 3 cytokines, IL-17A and IL-22, can by independent mechanisms sensitize hepatic stellate cells (HSC) to the action of TGF-β. The HSCs, thus more sensitized to signals of proliferation and fibrosis, remodel the extracellular matrix leading to a deterioration of the architecture and function of the affected patient’s liver.

The balance between the two cytokines IL-17A and IL-22 during different stages of liver disease and their combined roles remain unknown and further studies are needed. However, experiments in mice have determined that the inhibition, by small molecules, of programmes associated with production of IL-17A and IL-22 delays the development of hepatic fibrosis.

These discoveries allow researchers to better characterize the pathogenic role of type 3 cytokines, and elucidate how to intervene to prevent the development of fibrosis as well as liver cancer.

The next steps will make it possible to determine when cells producing IL-17A and IL-22 receive the signal to penetrate the liver, triggering a tissue-repair response. The objective will be to examine how the balance between the pro-inflammatory and anti-inflammatory signals is disrupted, since this is how fibrosis progression is influenced.

Given that the replacement of healthy tissue by scar tissue favours the development of more serious pathologies, such as cirrhosis of the liver and liver cancer, it is vital to learn how to block inflammatory cells from entering, which over the course of time may induce cancer. The various types of treatment, as well as frequency and intensity of doses that would make it possible to block the effects of type 3 responses, must be pursued in preclinical mouse models prior to being ultimately tested in humans. Medications already developed for the treatment of psoriasis in humans, successfully target type 3 cytokines such as IL-17 and IL-22. This avenue appears promising. 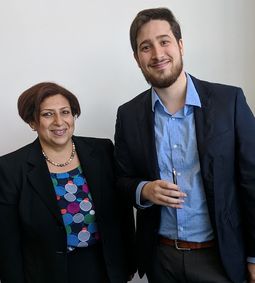 Naglaa Shoukry, Ph. D., and her team’s research involves investigating the immune response against hepatitis C virus (HCV), an infection that affects approximately 71 million individuals worldwide, and is a major cause of chronic liver disease including cancer. The team is also interested in understanding the role of immune regulation in the progression of hepatic fibrosis and the development of liver cancer. In particular, it examines the complementary and at times opposing roles of IL-17 and IL-22 in hepatic fibrosis and cancer, and the populations of inflammatory versus regulatory cells involved in this process.