The growing phenomenon of "demodernization" is the focus of a recently published collection of essays edited by Yakov Rabkin, a history professor at Université de Montréal. 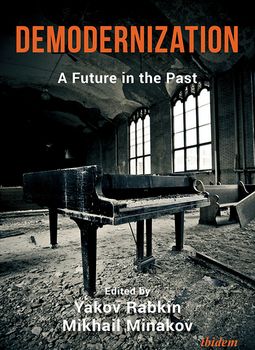 The idea for Demodernization: A Future in the Past came to Université de Montréal history professor Yakov Rabkin while analyzing the collapse of the former Soviet republics for a master’s seminar. Co-edited with Mikhil Minakov, principal investigator on Ukraine at the Keenan Institute in Washington, the book is a collection of articles by Canadian and foreign scholars who explore different manifestations of the reversal of modernity around the world. While they may appear disparate on the surface, Rabkin discovered that these manifestations have many elements in common. He took time out with UdeM Nouvelles to explain.

What exactly do you mean by “demodernization”?

In the 1960s, at a time when African countries were throwing off the yoke of colonialism, we began to see the emergence of Western and Soviet models of modernization, which actually have many points in common. These models sought to narrow the gap between rich and poor, build a strong middle class, ensure workers’ rights, foster identification with the state rather than on the basis of ethnic or religious identities, and promote rationality and science. We are currently witnessing the decline of several of these elements in many countries, and it is this phenomenon that we call “demodernization.”

How do you explain this trend?

With the rise of socialism and the articulation of a social project based on values other than financial profit, it became necessary to improve workers’ conditions so people wouldn’t give in to the attraction of socialist ideas. Otto von Bismarck, the conservative chancellor of imperial Germany, thus became one of the first leaders to introduce social measures such as government-funded health insurance. Similarly, it was in a bid to safeguard capitalism that the United States created the New Deal, which was also based on socialist-type programs. Despite the fact that the reality within the Soviet Union was far from rosy, the social options offered to the populace were enough to instil a fear of communism in the hearts of Western politicians – a fear made worse by the triumph of the Red Army over Nazi Germany. Socialist measures spread across Europe during “Les Trente Glorieuses” (the 30-year post-war period), but with the collapse of the Soviet Union in 1991, many of the reasons for maintaining a welfare state fell away. This was followed by a widening of the gap between rich and poor, along with the erosion of social rights, leading to a mounting sense of frustration that has contributed to the rise of ethnic nationalism. Indeed, it’s so much simpler to direct one’s frustration against an internal or external enemy, especially if they have a different skin colour or religion.

Can you give us a few examples of demodernization from your book?

In the introduction, I offer a perspective on the phenomenon of demodernization by drawing attention to its manifestations in both the former Soviet republics and in countries like Iraq and Afghanistan, which have been subjected to sanctions and invasions by the West. Several contributors focus on West Asia: for example, Orit Bashkin, of the University of Chicago, examines the fate of the Iraqi state, while Ilan Pappé of the University of Exeter analyzes the demodernization of Palestine. UdeM’s Guy Lanoue explores reforms undertaken in Abruzzo, Italy, and Philippe Genequand looks at modernization at the close of the Middle Ages, although the concept is somewhat of an anachronism in that context. Francisco Rivera tells the story of an abandoned mining village in Chile. Concordia University’s Richard Foltz discusses demodernization in the context of Tadjikistan, while Meir Amor applies the concept to the rights of refugees.

Does this global situation make you pessimistic?

Not at all! I try to encourage people not to miss the forest for the trees. We’re quite fortunate here in Montreal, but our lifestyle depends to a great extent on the labour performed by massively exploited workers in poor countries. Top-down globalization – the free flow of transnational investments – has altered the equilibria in poor countries, paradoxically provoking a bottom-up globalization, seen in successive waves of desperate migration. Authors such as the economist and historian Jacques Attali have warned that a global market without a global state can only lead to chaos. In reaction to this, we are currently witnessing a mobilization around seemingly disparate issues. This mobilization could benefit from a clearer understanding of the relationship between these issues, which is precisely what we hope to achieve with our book.

Demodernization: A Future in the Past, edited by Yakov Rabkin and Mikhail Minakov, is published by Columbia University Press. (580 pp., U.S. $65)