Thanks to the efforts of a pediatric medical team at CHU Sainte-Justine, a 2-year-old girl suffering from an extreme form of hydrocephalus may someday lead a more normal life. 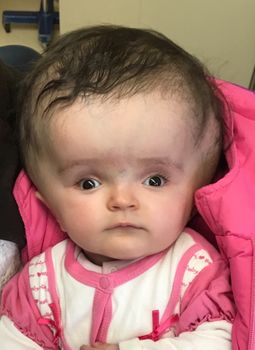 At 9 months, the baby girl's skull was 72 centimetres wide.

A 2-year-old girl with an extreme form of hydrocephalus could someday lead a more normal life, thanks to a remarkable surgical intervention aided by state-of-the-art technologies used by a leading pediatric team supervised by two assistants professors of medicine at Université de Montréal.

The child, who underwent two operations at CHU Sainte-Justine children's hospital in Montreal, including a total cranial vault reconstruction, could not even sit upright because of the size and weight of her head. Her brain was being compressed by an excess of cerebrospinal fluid.

Using virtual modelling and three-dimensional technology supported by a 3D printer, and after a 12-hour operation, surgeons were able to open the child’s abnormally large skull and reconstruct it to closer to normal dimensions. Prior to the procedure, her skull contained three litres of cerebrospinal fluid, while the normal amount is 150 millilitres. To achieve this amazing feat, the team made a detailed model of the girl’s skull, numbering the sections so they could later put them back in place, somewhat like a puzzle.

“Our little patient suffered from an enlarged skull, otherwise known as extreme macrocrania,” said Dr. Alexander Weil, a pediatric neurosurgeon (MD, FRCSC, FAANS, FACS) at CHU Sainte-Justine. “If we hadn’t operated, she would have continued to be weighed down and immobilized by the size and weight of her head. This surgery gives us hope that she will now be able to develop and live more normally.” Added Dr. Daniel Borsuk, the hospital centre's head of plastic surgery (MD, MBA, FRCSC, FACS): "The collaborative efforts of an experienced multidisciplinary team, which made it possible to successfully carry out this complex surgery.”

The surgeons expressed their heartfelt thanks to all the health professionals who took part, as well as to the child’s family for placing their trust in the medical team.

Hydrocephalus is an accumulation of cerebrospinal fluid (CSF) in the brain cavities as a result of either a blockage in the flow of CSF or the body’s inability to absorb it. Without treatment, brain lesions can lead to delayed neurological development or even death. Other possible effects include learning disabilities, and attention, memory and concentration problems.

Français
Previous The search for ET December 11, 2018
Next Thousands of stars turning into crystals January 9, 2019
Share