UdeM and the FAÉCUM have launched a campaign to raise students’ awareness about the importance of taking care of their mental health and reaching out to others when they’re feeling down.

Anxiety, distress, feeling overwhelmed: These symptoms can happen to anybody and for all kinds of reasons, but college and university students are particularly at risk.

Université de Montréal (UdeM) and its federation of student associations (FAÉCUM) have launched a campaign to raise awareness about the importance of mental health and being kind to one another. Under the slogan “Ça va aller” (“It’s gonna be alright”), the campaign makes use of posters, murals, social media and a website to promote activities and share messages encouraging people to speak up and combat feelings of isolation on campus.

‘We're all in the same boat’ 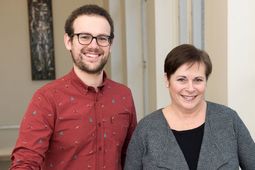 In October 2016, FAÉCUM published the findings of its mental health survey (in French only) of more than 10,000 students. Its main conclusion was that 75 per cent of respondents said they wanted to improve their mental health and half indicated that they had suffered moderate-to-acute symptoms of depression in the previous year.

These findings aren’t unique to UdeM. Also in 2016, the American College Health Association surveyed 43,780 Canadian students for its National College Health Assessment and found that 4 per cent had experienced symptoms of depression in the 12 months preceding the survey.

In addition, a 2011 paper published for the the Canadian Association of College and University Student Services indicated that mental health issues are more prevalent among Canadians who attend post-secondary institutions than in the general population, and that the problem is growing.

“These results show that we're all in the same boat,” said FAÉCUM corporate secretary Matis Allali. “Most of us go through hard times at some point during our university careers, and that’s perfectly normal.”

“The important thing is to take care of your mental health and reach out to others – don’t assume you’re the only person who’s going through a rough time,” added Claire Benoit, general manager of UdeM Student Services (SAÉ).

In addition to running the joint survey with FAÉCUM, UdeM also set up a working group to address the issue of psychological well-being. In December 2016, this group came up with several recommendations, such as creating an awareness-building campaign about mental health and associated stigmas.

In recent months, a working group consisting primarily of representatives from FAÉCUM and SAÉ developed the Ça va aller campaign, with messages and tools that will be rolled out from February 4 until the end of the semester.

“The university and its student services department have a responsibility to help students succeed,” said Louise Béliveau, vice-rector of student and academic affairs. “In light of rising demand for mental health services, we have expanded our offerings in this area and launched new initiatives, such as Défi Soi and the Sentinelle network, to help students.”

Added Allali: “FAÉCUM obviously can’t check in with every student to ask about their mental health, but we have worked with student services and various community members to create a safety net – and we hope the Ça va aller campaign will promote it.”

The joint FAÉCUM/UdeM survey yielded a goldmine of information and identified three factors that correlate with episodes of psychological distress: poor nutrition, sleep disturbances and feelings of isolation.

“Correlation isn’t causation, but students often list at least one of these factors as a reason for their state of mind,” said Benoit.

The campaign was built around several “It’s gonna...” messages that will address these factors and be displayed in various places around campus. Here are a few examples:

“The idea behind this campaign is to encourage students to look out for themselves and for each other, with kindness, so that everyone gets help in learning to live with their problems and improve their mental health,” said Benoit.

The Ça va aller website (in French only) includes a comprehensive list of internal and external resources for students.

And it offers students an online quiz to test their knowledge of mental health issues.