Scientists at UdeM and over 30 other universities and institutions argue for the protection of ancient peatlands to prevent the release of greenhouse gases into the atmosphere. 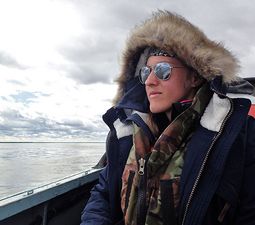 Carolina Voigt on a field trip in northern Finland.

Global warming may have an additional, worrisome source, scientists observe: the thawing permafrost of the Arctic. Climate change could soon cause ancient permafrost peatlands in the Far North to thaw and release their carbon into the atmosphere.

And it's not only an issue in the Arctic. New scientific analysis shows there are more than 1,000 underground peatlands across the globe that, if disturbed by natural or manmade activity, could release even more carbon.

Twin studies led by the University of Eastern Finland (UEF) and involving researchers at Université de Montréal point to the importance of un-decomposed plant material – peat – as a vector of climate change.

"Peatlands are an important stock of carbon: they represent only about three per cent of the land area on Earth but they store about one-third of the soil carbon – it's totally disproportionate," said Talbot. "They tend to form during warm periods, and we're in a climate now that is getting warmer and warmer. The big question now is how the peatlands are going to evolve." 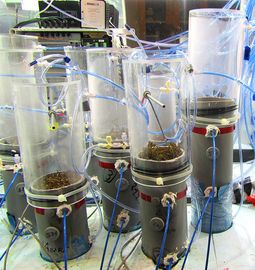 Core samples of peat and permafrost in Carolina Voigt's lab at the University of Eastern Finland.

While they remain buried, peatlands can actually slow greenhouse gas emissions by transferring all that carbon underground. But when they are exposed – by such natural and manmade phenomena as wildfires, drainage and flooding – then the carbon risks being released anew, further contributing to global warming.

In the Far North, thawing of permafrost in peatlands may also expose these long-immobile carbon stocks. That's what Voigt and her team found in their research in the permafrost zone of Finnish Lapland. After extracting 80-centimetre-long peat cores that included the upper 15-centimetre of permafrost, the researchers were able to simulate permafrost thaw in the laboratory, replicating near-natural conditions.

What they found was cause for concern: as the permafrost started to thaw, the peat cores emitted larger quantities of carbon dioxide, a greenhouse gas that accelerate climate warming. What's unknown is how long, ultimately, that process takes in the wild and to what degree.

"It's always tricky to try to put a timeline on this sort of thing and project what will happen based on experiments in the lab," said Voigt, a postdoc in the lab of UdeM associate geography professor Oliver Sonnentag, Canada Research Chair in Atmospheric Biogeosciences in High Latitudes.

"What we can say based on our results is that these type of peatlands may release CO2 if they thaw. The peat layer of the permafrost is thick, and thawing provides a large pool of previously inaccessible carbon, promoting greenhouse gas production." 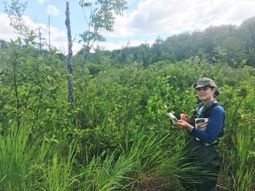 Julie Talbot surveying peatlands in the Laurentian Mountains of Quebec.

A word of caution: "While there is the possibility that peatlands, and especially permafrost peatlands, will release a lot of carbon due to climate change, as Carolina’s research indicates, our study shows that peatlands may also have the potential to actually store lots of carbon in the future, as warm periods tend to favour carbon storage," said Talbot.

"What’s important is that both scenarios point towards the importance of conserving peatlands – that’s a point that needs to be emphasized." More research is needed, added Voigt: "Only by studying the peatlands can we understand the carbon cycle of these fragile ecosystems." 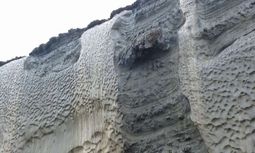 Buried peat profiles that have been preserved in permafrost, protruding from the face of a cliff in the eastern Lena River delta in Siberia, Russia.

Voigt, who lived in Finland during her PhD studies at UEF, is now concentrating her research on permafrost peatlands of the Northwest Territories; in fieldwork there this summer, she'll be studying fluxes of CO2 and methane. For her part, Talbot is just back from South America, where she studied peatlands of the Sub-Antarctic in the Patagonia and Tierra del Fuego regions of Argentina and Chile.

"I'm really interested to see what we can learn from the differences we might see in these peatlands, what's happening there and what's happening here," said Talbot, whose lab specializes in the study of long-term ecosystem stability. "We have a lot of the same plants as they do, our peatlands formed more or less at the same time as their, but they have a much drier climate. So we'll see if that's significant."

"Widespread global peatland establishment and persistence over the last 130,000 years," by Claire C. Treat et al, was published Feb. 25 in Proceedings of the National Academy of Sciences (U.S.).