Zebrafish are put under the lens at CHU Sainte-Justine Research Centre to see how they repair damaged tissue – with some surprising results. 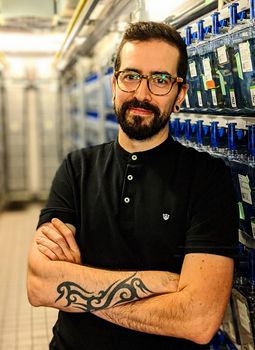 Heart attacks are damaging, and the severity depends on how long blood flow has been interrupted; when temporarily deprived of oxygen, heart cells die. In addition, the heart can’t rebuild its own tissue, leading to its failure, the main cause of mortality and morbidity worldwide.

Unlike humans and other mammals, however, adult zebrafish can regenerate damaged heart tissue. In a new study, Université de Montréal professor Ruben Marin Juez, a new recruit at the CHU Sainte-Justine Research Centre, reveals the complex mechanisms that allow this marine animal to "repair its heart" after injury.

Juez’s discovery offers a promising perspective on the therapeutic avenues of cardiac revascularization and regeneration in humans. The results are published in the journal Circulation Research.

The coronary vessels transport blood. However, in adult zebrafish, they are also essential for heart muscle cell proliferation and healing.  In fact, it is the injury itself that would immediately trigger a regenerative response from the coronary vessel cells, which is needed to reconstitute the tissue. 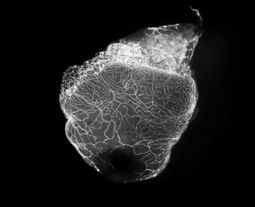 View of the heart of a zebrafish.

In their new study, Juez’s international research team focused on identifying and plotting the interaction of molecules that allow this regenerative response. The scientists studied the cell signalling that generates coronary vessel cell proliferation.

By manipulating the action and expression of these molecules, they were able to identify two proteins – Emilin2a and Cxcl8a – as key players in the revascularization and regeneration of cardiac tissue.

“We already knew that, after cardiac injury, vascular endothelial growth factor C (Vegf-C) was upregulated in adult zebrafish, and that this factor was involved in cardiac regeneration,” said Juez.

“This discovery will make it possible to study the potential of this molecule for treatment purposes in people with heart damage.”