A microbiologist at UdeM helps discover a novel mode of action found in two new antibiotics that adversely affects the ability of bacteria to reproduce.

An Université de Montréal microbiologist has contributed to the discovery of a novel mechanism of action in two new antibiotics to treat infections normally resistant to antibiotics.

Co-authored by UdeM's Yves Brun and colleagues from McMaster University and Indiana University, the breakthrough – which Brun calls "the Holy Grail of antibiotics" – appears today in Nature.

"Complestatin and corbomycin are antibiotics that attack peptidoglycan, the main component of the cell wall essential to the growth and survival of almost all bacteria," said Brun, a professor in UdeM's Department of Microbiology, Infectiology and Immunology.

"These two antibiotics inhibit the action of autolysins needed for cell growth and division," explained Brun, who also holds the Canada 150 Research Chair in Bacterial Cell Biology. And when bacteria are unable to divide, they become increasingly fragile, he added.

"With this mode of action of antibiotics, bacteria become long filaments rather than small rods, which affects their ability to reproduce."

The discovery marks the first time in decades that a new mode of action for antibiotics has been revealed. And there's a bonus: the bacteria they fight are unable to develop significant resistance to them. 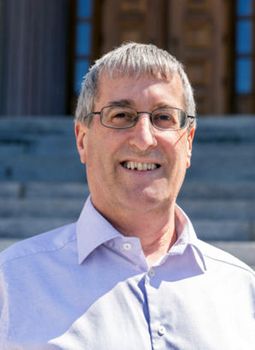 In December, Brun contributed to a separate study, published in Cell, about another related breakthrough: the first-ever modeling of the surface layer specific to certain bacteria.

Known as the S-layer (for surface layer), this outer layer has long been a mystery to microbiologists; they still do not fully understand its function, even though it clearly plays an important role in protecting the bacterial cell.

However, using cryo electron microscopy (cryo-EM) techniques, Brun and his collaborators were able to model the structure of the S-layer and better understand how it is connected to the cell.

"Knowing the detailed structure at the atomic level of this connection between the surface layer and the surface of the cell offers enormous potential to then develop molecules that can target this attachment and make the cell more sensitive to antibacterials," said Brun.

Combined with the discovery of the new mode of action of two antibiotics, this development "opens up prospects for weakening the action of bacteria and making them more vulnerable," he concluded.

"Evolution-guided discovery of antibiotics with a novel mode of action," by Yves Brun et al, was published Feb. 12, 2020 in Nature.