A team from UdeM’s Department of Computer Science and Operations Research is using artificial intelligence (AI) and modeling to optimize and automate winter strawberry production.

Imagine a vertical winter farm starting up with just a development lab and opening its first industrial production unit less than two years later. That’s what Winter Farm did in the fall of 2021 when it opened Canada’s largest controlled-environment vertical strawberry farm in Vaudreuil. The 1150 m2 facility should produce more than 180,000 kilograms of berries between the months of October and June.

That’s already impressive, but Winter Farm wants to revolutionize agricultural methods in order to grow the business and achieve its ambitious goals: produce more than 13 million kilograms of fruit and replace 10% of Canada’s strawberry imports by 2025. Enter IVADO and research teams from three Quebec universities: ETS, HEC Montréal and UdeM.

The team from the University of Montreal’s Department of Computer Science and Operations Research is working on building an AI-based system to automate control decisions in the strawberry vertical farm.

A farm and its digital shadow 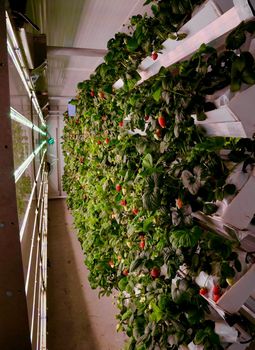 The team is composed of Professor Houari Sahraoui, an expert on software modeling and AI, Professor Eugene Syriani, a expert on computer system modeling and simulation, and Istvan David, a postdoctoral researcher specializing in multi-paradigm modeling and cyber-biophysical systems.

“Our team is modeling all aspects of the plants’ growth to create a digital shadow—that is, a digital version that mirrors the behaviour of the physical farm as closely as possible,” Sahraoui explained.

It’s a tall order. It means modeling plant growth, the entire environment, and how the environment affects the plant. “You have to take into consideration the plant, the nutrients in the irrigation water, the light settings, the temperature and the air currents,” said Sahraoui. “The only aspect we don’t model is pollination because the bumblebees in the indoor farm take care of that.”

With this digital shadow, the farm will be able to perform event simulation—that is, simulate the effects of changes in lighting, irrigation and so forth. For example, how would plant growth be affected if the light intensity in the production unit were turned up at 6 a.m. instead of 8 a.m.? On a conventional farm, agronomists must wait until the end of the strawberry production cycle to determine whether the change was beneficial.

“Our goal with the simulation is to reduce this process from five weeks to a few seconds,” said Sahraoui. “Winter Farm’s agronomist will be able to reproduce potential changes and instantly ascertain their effect.” 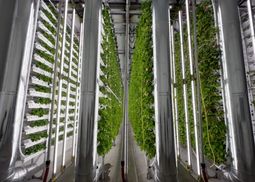 Researchers are accustomed to working with so-called cyber-physical systems, such as machines in the automotive or aerospace industries. But in this project, they’re working on cyber-biophysical systems: living organisms.

David explained the magnitude of the challenge. “Of course, we are already able to observe and manually respond to the growth of plants. But controlling and predicting the behaviour of plants is an entirely different ball game. In this project, we want to influence the growth cycle of plants to maximize output and minimize losses.”

To do so, the researchers will have to chop up a continuous process—the growth of a plant—into a series of observable, measurable events. Examples of internal plant events might be: the plant grew, the plant produced a flower, it produced a fruit, etc. “We must also find a way to convert continuous real factors, such as wind, into discrete events,” Syriani noted. “Given that we can’t control nature, this project gives us an exciting opportunity to work in a controlled environment independently of the seasons.”

A digital twin to control the indoor farm

After creating a digital model that replicates the farm and simulates all its features, the team plans to create a digital twin, which would have the capability to manage production at the production unit automatically, in real time. “We’re only going to start working on this in our two-year project,” said Sahraoui. “As the model we are developing does not yet exist, we will need a long period of refinement. So we’re going to work closely with the farm’s agronomist to make sure our modeling really matches plant behaviour.”

Why automate and model a farm? For one thing, because while the type of farming that Winter Farm practices is already being done manually on a small scale, doing it on a large scale requires the use of technology. On an environmentally responsible farm that uses no chemical pesticides, automating production stabilizes the environment by reducing disruptions such as doors opening and people entering and leaving.

“We were enthusiastic about supporting an agriculture project without pests or pesticides,” said Sahraoui. “Food self-sufficiency is a vital, high-priority issue from the societal and environmental points of view. Our dream is that some day technology will enable us to grow anything anywhere on the planet, regardless of the climate or the seasons.”

Professors Houari Sahraoui and Eugène Syriani are currently organizing the next edition of the world’s largest model-driven software conference, MODELS 2022, to be held in October 2022. The theme will be “modeling for social good.”

“Our project with Winter Farm is a perfect example of our ability to advance scientific research in ways that have a positive impact on societal, environmental, and food self-sufficiency issues,” said Syriani.