Thanks to a large donation and the work of UdeM biochemist Alexey Pshezhetsky, the Elisa Linton Research Chair in Lysosomal Diseases will help treat Sanfilippo disease and similar genetic syndromes. 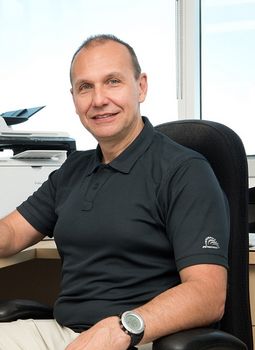 Thanks to a generous donation by the Sanfilippo Children’s Research Foundation and the work of CHU Sainte-Justine biochemist Alexey Pshezhetsky, a treatment is now within reach for what are now incurable diseases leading to dementia in children.

“Lysosomal disorders such as Sanfilippo disease cause a progressive loss of physical and mental abilities leading to premature death,” said Pshezhetsky. “It’s a most terrible disease because you see your child deteriorating and can’t stop it. It’s like having Alzheimer’s disease at 10 years old.”

The chair was created in September and named after the youngest daughter of its benefactor, the Linton family of Toronto. Elisa Linton died from Sanfilippo disease, a rare genetic disorder affecting thousands of children worldwide and hundreds of young Canadians, on October 31, 2016.

To mark the sixth anniversary of her death, the CHU Sainte-Justine Research Centre is today recognizing the Lintons’ longstanding generosity, which has ensured that Pshezhetsky and his team will continue their research towards important scientific advances.

“We are thrilled to see how, since then, he and his team have moved research forward,” she said, “and we are thankful for the understanding he has brought to Sanfilippo syndrome and the hope he continues to bring to families worldwide as his initiatives move to the next level."

“We use molecules that cross the brain barrier, protect neurons and inhibit brain inflammation,” said Pshezhetsky. “Our treatment is unique because it can be used on symptomatic patients. Two molecules have shown good results so far and have the potential to be tested soon in clinical trials.”

For now, lysosomal diseases continue to claim lives, but with clinical trials on the horizon, Pshezhetsky hopes to make a significant breakthrough in his ongoing research sometime in the not-too-distant future.

Quite a challenge ahead

It will be quite a challenge, he said.

“First, you need to understand the disease and identify the genetic and biochemical abnormalities. Then, you have to develop treatments and test their effectiveness. This process takes many years, a lot of money and highly specialized scientific expertise.”

As Eastern Canada’s top centre for the evaluation, diagnosis and management of chronic, severe and rare childhood diseases, CHU Sainte-Justine handles 70 per cent of the region’s most severe cases. About 10 per cent of these are rare diseases.

The CHU was recently designated by Quebec’s Ministère de la santé et des services sociaux as the province’s Quebec for Clinical Genomics  and the only one responsible for the management of lysosomal diseases in Quebec.

For 15 years, Pshezhetsky has co-supervised of the Biochemical Genetics Diagnostic Laboratory at CHU Sainte-Justine, where he developed protocols and interpreted patients’ data for over 25 lysosomal diseases, allowing him to gain a unique perspective on these rare conditions.

Français
Previous A front-row seat to a high-level talk on foreign affairs October 28, 2022
Next Patrick Garon-Sayegh: the expert on expert opinions November 1, 2022
Share