In a Phase One-Two clinical trial, the vast majority of patients with blood cancers are on the road to recovery, thanks to the UM171 molecule, discovered at the IRIC of the UdeM.

The discovery of the UM171 molecule, by Dr. Guy Sauvageau and Anne Marinier, made headlines in 2014 following an article in Science. Hailed by some as a revolution, even a miracle, in the field of blood stem cell transplantation, the UM171 molecule is delivering on its promise.

After the two-year clinical trial, which used the UM171 molecule in blood stem cell transplants for 22 patients with acute blood cancers such as leukemia, lymphoma or other bone marrow cancers, the rates of graft rejection and mortality linked to these transplants were considerably reduced. These spectacular results, obtained by a team of researchers led by Dr. Sandra Cohen, professor at the Faculty of Medicine of the Université de Montréal and hematologist at Maisonneuve-Rosemont Hospital, have just been published in The Lancet Haematology.

Making better use of umbilical cords 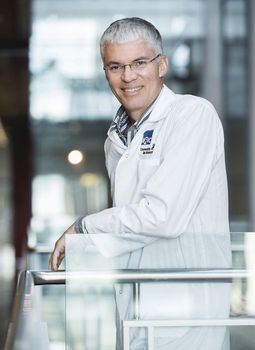 More than 100,000 patients worldwide undergo a blood stem cell transplant each year as a last resort treatment for various blood diseases. About half of these treatments fail because the disease returns, or as the result of graft versus host disease (cGVHD), or because the patient dies due to the chemotherapy and radiation treatments that accompany the transplant.

"Although the rate of graft versus host disease when using umbilical cord blood stem cells is low, these cells are rarely used because the cords are small and do not contain a sufficient quantity of cells to treat an adult," explained Dr. Sauvageau, who researches the molecular genetics of stem cells at the Institute for Research in Immunology and Cancer (IRIC) of the Université de Montréal.

This is where the UM171 molecule, named in honour of the Université de Montréal, comes into the picture. It is now capable of multiplying the number of stem cells present in a unit of umbilical cord blood 10- to 80-fold. The molecule is the culmination of a dozen years of research carried out by Dr. Sauvageau’s team of biologists and a team of chemists led by Anne Marinier, a professor in the Université de Montréal’s Department of Chemistry and Principal Investigator and Director of the Drug Discovery Core Facility at IRIC. Of the 5,000 molecules they tested, UM171 was the only one that showed a significant proliferative effect. It was synthesized into 600 versions by the chemists in order to detect the most effective form.

"In just seven days, UM171 multiplies the stem cells by an average of 30 fold, while at the same time providing a rejuvenating effect on the cells by blocking the aging process," said Guy Sauvageau.

Between 2016 and 2018, 22 adult patients with advanced blood cancer participated in the clinical trial at Montreal’s Maisonneuve-Rosemont Hospital, with funding support from the Stem Cell Network, the Canadian Cancer Society and the Canadian Institutes of Health Research. Some of the participants in the study had already undergone an unsuccessful stem cell transplant. The results far exceeded expectations. None of the patients developed chronic autoimmune disease as a result of the transplant, and only one patient died from complications during the trials.

"Not a single patient needed immunosuppression treatment after 13 months, whereas with normal transplants, 50 percent of patients require such treatment at that point," added Guy Sauvageau. "No other biotechnology procedure has produced these kinds of results."

By dramatically boosting the stem cell content, the procedure considerably increases the number of usable umbilical cords, even the smallest cords. This in turn greatly increases the availability of genetically matched cord blood between donors and recipients.

"While only five percent of umbilical cords are usable when working with the conventional method, our procedure brings that proportion up to 50 percent,” the Investigator pointed out. “This allows us to increase the availability of genetically compatible transplants by 50 to 80%."

An analysis of the molecular process triggered by UM171 shows that not only does it greatly expand the number of stem cells in cord blood, it also changes the composition of the graft by multiplying the number of dendritic cells 600-fold and the number of mastocytes 8,000-fold. These two cell types play vital roles in the immune system.

The benefits of UM171 are unmatched by any other process: it allows for rapid and durable engraftment, accelerates reconstitution of the immune system, less frequently triggers fever and results in very few transplant-related diseases, not to mention that the mortality rate is extremely low. In addition, stem cell transplants using umbilical cord blood carry no risk for the donor and the process of expanding the number of cells, thanks to UM171.

“We will soon conduct a Phase 3 clinical trial in the hope of obtaining approval from the Food and Drug Administration, which would then make this promising treatment available to the general population as quickly as possible” pointed out Dr. Sauvageau and Dr. Cohen.

Americans give the green light to a clinical trial

Another clinical trial, also conducted with high-risk leukemia patients, will soon launch in the United States and Dr. Sauvageau is very hopeful that many of them will be saved. The new study has already obtained the approval of the Food and Drug Administration, which authorizes drug research and commercialization in the U.S.

Since UM171 was discovered and synthesized at IRIC, the Université de Montréal is the sole proprietor of this molecule, which is covered by an exclusive international license granted to ExCellThera, a Montreal-based advanced clinical-stage biotechnology company that delivers molecules and bioengineering solutions to expand blood stem and immune cells for therapeutic use.

Any patient who wishes to participate in the clinical study must first discuss it with his or her treating hematologist, who may, after evaluation, refer the file to Maisonneuve-Rosemont Hospital or not.

Université de Montréal and its two affiliated schools, École Polytechnique (engineering) and HEC Montréal (business), are amongst the world's top universities, according to international rankings. Founded in 1878, the campus today has over 67,000 students and 2,700 professors, making Université de Montréal the second largest university in Canada. Its students are drawn to the university by its deep roots in cosmopolitan Montreal and in consideration of its tenacious dedication to its international mission

About the Institute for Research in Immunology and Cancer

An ultra-modern research hub and training centre located in the heart of the Université de Montreal, the Institute for Research in Immunology and Cancer (IRIC) was created in 2003 to shed light on the mechanisms of cancer and discover new, more effective therapies to counter this disease. IRIC operates according to a model that is unique in Canada. Its innovative approach to research has already led to discoveries that will, over the coming years, have a significant impact on the fight against cancer.

The Centre intégré universitaire de santé et de services sociaux de l'Est-de-l'Île-de-Montréal (CIUSSS-EMTL) brings together 26 facilities, including Maisonneuve-Rosemont Hospital, and serves a population of over 500,000 Montrealers. Affiliated with the Université de Montréal, it offers a complete range of primary health and social services, housing, general, specialized, subspecialized hospital care and mental health care. Through its two research centres and four areas of excellence, which include mental health, immuno-oncology, vision health and nephrology, the CIUSSS-EMTL is a centre of health innovation in Canada. The innovative ideas of its teams contribute to the visibility of the CIUSSS-EMTL both nationally and internationally.

ExCellThera is an advanced clinical stage biotechnology company delivering molecules and bioengineering solutions to expand stem and immune cells for use in novel one-time curative therapies for patients with hematologic malignancies, autoimmune and other diseases. ExCellThera’s lead solution combines a proprietary small molecule, UM171, and an optimized culture system. In pursuit of better treatments for patients, the company is building out its portfolio of products, as well as supporting best-in-class clinical trials.

Français
Previous Could rhythm be at the root of everything around us? November 4, 2019
Next Beyond the clichés: a video portrait of daily life in the former GDR November 8, 2019
Share