The Supreme Court of Canada is about to rule on whether Uber Eats drivers can ask the courts to determine their employment status. Two professors from HEC Montréal and UdeM are monitoring the case.

"Be your own boss.” That’s the enticing come-on that multinational Uber Technologies uses to encourage would-be drivers to use its digital platform (and their own car) to earn a living or supplement their income. But self-employment is not what some Uber Eats delivery drivers in Ontario want.

In 2018, led by a driver named David Heller, they tried to launch a class-action lawsuit against Uber, demanding to be recognized as employees so as to receive the benefits and protections set out in the province's Employment Standards Act (ESA).

The case hit a roadblock in Ontario's Superior Court but got back on track in the Ontario Court of Appeal. Now the Supreme Court of Canada is set to decide whether Uber Eats delivery drivers can join the class-action or whether they'll have to submit to international commercial arbitration in Amsterdam.

Why Amsterdam? Because, as stated in a clause of the drivers' contract with the corporation, "any dispute, conflict or controversy ... shall be exclusively and finally resolved by arbitration ... [in] Amsterdam, The Netherlands."

In the article, the two labour-law specialists say that the ruling made by the Supreme Court "will have a lasting effect on access to justice for vulnerable individuals." 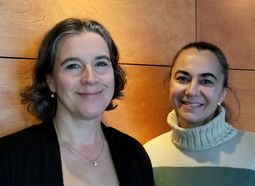 Before they can work, every Uber Eats delivery driver in Ontario must first agree to the terms and conditions of a 14-page contract viewable on their mobile phone.

“To access the platform's features, drivers first have to click on ‘Yes, I agree’ then click again to confirm that they’ve read and agree to the terms of the contract,” write Coiquaud and Martin.

If the delivery driver gets around to reading Article 15 of the contract, he or she will learn about the corporation's arbitration clause: if there is a dispute between the parties, it must be referred to an arbitrator appointed by Uber.

And that's not all. Every driver who requests arbitration has to pay US$14,500 in filing and administration fees, and then go defend the case where the arbitration will be held, in Amsterdam, further adding to their costs.

Typically, an Uber Eats delivery driver in Ontario earns $400 to $600 per week for 40 to 50 hours of work, using his or her own vehicle, one that must be operated, insured and maintained at the driver's own expense.

“The proceedings that were supposed to determine whether the lawsuit could be certified as a class action turned into a dispute over the validity of the arbitration clause and whether these workers have the right to turn to the justice system,” said the professors, who are also members of the Interuniversity Research Centre on Globalization and Work.

Initially, in 2018, Heller filed his class-action claim on behalf of himself and his colleagues. They sought $400 million in damages and interest from Uber, as well as recognition of delivery drivers’ status as employees, which would entitle them to the benefits and protection set out by the ESA, including minimum wage, vacation and paid days off.

Ontario Superior Court Judge Paul Perell granted Uber's motion to stay the delivery drivers’ class action in favour of arbitration. Perell found that, absent any legislative language to the contrary, arbitration agreements must be enforced “despite the inequality of bargaining power between the parties,” as the professors put it in their analysis.

Heller filed an appeal and, in a unanimous ruling, the Ontario Court of Appeal overturned the decision, determining that the arbitration clause amounted to an illegal contracting out of the ESA and is unconscionable under common law.

Furthermore, Court of Appeal judge Ian V.B. Nordheimer, who wrote the decision, concluded that, aside from revealing a significant imbalance in each party's bargaining power, the facts indicate that the arbitration clause “results from a strategy designed by the multinational to put vulnerable drivers at a disadvantage by imposing a foreign forum where they are unfamiliar with the law applicable to them.”

Consequently, the Court of Appeal invalidated the arbitration clause and authorized Heller to relaunch the class-action lawsuit on behalf of Uber Eats drivers. The court, write Coiquaud and Martin “believes that, if we assume that drivers are employees, the clause would allow Uber to bypass the ESA, while the matter of determining employment status must be settled publicly by an Ontario court."

More cases in the U.S.

The question of whether arbitration clauses are valid in the face of class-action lawsuits – in this case, about whether an Uber Eats “partner” should be recategorized as an employee – has come up in the United States as well.

“But U.S. courts responded completely differently from the Ontario Court of Appeal, Marin said in an interview. "This is because arbitration clauses are more widely accepted under U.S. law, and because Uber adapted the specific terms of its clauses to meet U.S. requirements."

For example, in the California case of Mohamed v. Uber, a court granted Uber's appeal against a class-action suit. The court then upheld the arbitration clause, which aside from imposing arbitration, required Uber drivers to waive their right to file any suit, even a class action, before the courts.

Another potential abuse is that imposing arbitration may deprive workers of access to justice, given the required terms – in the Ontario case, have to hold hearings in Amsterdam – and their cost.

Finally, the private and confidential nature of private arbitration eliminates the possibility of developing case law on this issue.

In their analysis, Coiquaud and Martin showed the usefulness of class action as an indispensable tool for claiming employee status and giving delivery drivers access to the courts.

“These figures show how important the issue before the Supreme Court of Canada is, and how it will have a lasting effect on access to justice for vulnerable individuals,” conclude Coiquaud and Martin.

Français
Previous When space travel is a blur November 28, 2019
Next When depression drives you to drink December 4, 2019
Share