The team of Dr. Gregor Andelfinger makes a breakthrough in understanding the mechanisms of a common congenital heart disease. 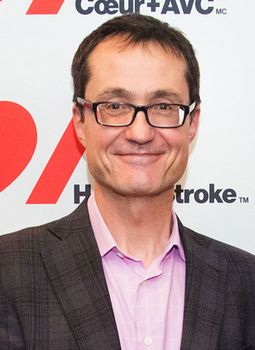 A team of researchers at CHU Sainte-Justine and Université de Montréal has discovered a new mechanism involved in a common congenital disease of the aortic valve. The findings of the study, conducted in collaboration with the Hadassa Hebrew University Medical Center, were published in the prestigious journal Nature Genetics.

Valve disease affects two percent of the population, which is a significant proportion. Despite this high incidence and many signs that point to the role played by genetics in aortic diseases, only a few genes have been identified to date. In this case, a gene known as ADAMTS19 was shown to be involved in an aortic valve disease.

“Valve diseases can affect one of the heart’s four valves – the tricuspid, pulmonary, mitral or aortic valve. We looked at patients with a bicuspid aortic valve, which is an aortic valve that has only two functional leaflets instead of the usual three,” explained Dr. Gregor Andelfinger, a pediatric cardiologist and researcher at CHU Sainte-Justine. Most patients affected by this valve disease are asymptomatic in early life. But in adulthood, this bicuspid valve can leak or cause premature aortic narrowing, resulting in shortness of breath or abnormal fatigue on exertion.

This discovery was made in the course of following a family at CHU Sainte-Justine; two of the three siblings in this family have this congenital variation, which helped to identify the culprit ADAMTS19 gene. Up to now, this gene had virtually never been characterized by a medical team, not to mention associated with this disease.

“To understand the role of this gene, we had to use a preclinical model that presented the same pathological features as our young patients. This helped us to analyze the function of this gene in great detail and to define the mechanisms of the disease,” explained Florian Wünnemann, PhD and the lead author of the study.

“By using single cell sequencing, a new technology that establishes the genetic profile of a single cell – in heart tissue, for example – we can very precisely define the type of cell behind the pathology. This really helped us demonstrate the molecular consequences of the mutation,” he added.

Indeed, the data shows that the mutation in patients changes the regulatory mechanism in the valves. One thing leading to another, an Israeli team of researchers at the Hadassa Hebrew University Medical Center that had identified exactly the same gene contacted Dr. Andelfinger and his team, lending support to their hypothesis.

An estimated 4,000 valve surgeries are performed in Canada each year, and this figure is constantly rising due to ageing of the population. On top of the pain and suffering of patients and their families, the economic burden is close to $1 billion a year.

CHU Sainte-Justine is a leading provincial centre of expertise in rare genetic diseases in terms of the quality and number of its research projects, its clinical management and knowledge transfer. The discovery of the genetic causes of some 40 rare diseases by the teams at CHU Sainte-Justine in recent years is a shining example of this expertise.

The article “Loss of ADAMTS19 causes progressive non-syndromic heart valve disease” was published in the journal Nature Genetics on December 16th, 2019. The lead author is Florian Wünnemann, a former PhD student under the supervision of Dr. Gregor Andelfinger. The principal investigator is Dr. Gregor Andelfinger, Associate Professor in the Department of Pediatrics at Université de Montréal, and Cardiologist Pediatrician, Researcher, and Head of Research Axis, Fetomaternal and Neonatal Pathologies at the CHU Sainte-Justine Research Center. The study received support from the Heart and Stroke Foundation of Canada, the Leducq Foundation, the National Bank Research Chair in Cardiovascular Genetics and the Fonds de recherche du Québec – Santé.