In a study published in Cell Stem Cell, a research team of 15 scientists led by UdeM hematologist Guy Sauvageau demonstrates the cancer-fighting molecule’s mechanism of action. 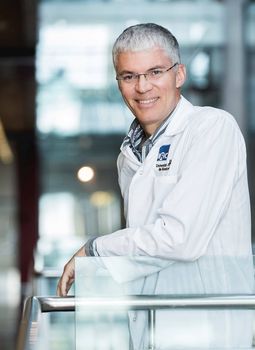 A new step has been taken in the understanding of the cancer-fighting molecule UM171: a team led by Université de Montréal hematologist Guy Sauvageau has succeeded in describing the molecule’s mechanism of action.

"Finally, we know how UM171 works," said Sauvageau, commenting the results of a study published Jan. 7 in Cell Stem Cell. Its first author is Jalila Chagraoui, an associate researcher in his laboratory at the Institute for Research in Immunology and Cancer (IRIC).

In their study, the two scientists and 13 co-authors explain how UM171 uses a novel molecular mechanism to manage the epigenome – the set of chemical modifications to the DNA and DNA-associated proteins – of the stem cell and how it may even contribute to its rejuvenation.

Discovered at IRIC, UM171 was developed as a collaboration between a team of chemists led by UdeM associate professor of chemistry Anne Marinier and a group of biologists under the supervision of Guy Sauvageau. It was named in 2014 in honour of Université de Montréal.

Over the last four years of testing at Montreal’s Maisonneuve-Rosemont Hospital, a majority of patients with advanced blood cancers who received a single dose of UM171-expanded cord blood cells are still alive, their cancer in remission.

“Not only are most patients in good health,” noted Sauvageau, “but most are not dependent on a cocktail of immuno-suppressive drugs that many bone-marrow transplant recipients have to take for several years.”

Under an experimental research protocol, close to 70 patients recruited in Canada and the United States are now being followed in their treatment. Many do not respond to the most common treatments in oncology.

It is still too early to speak of a cure – for that, the duration of remission must exceed five years – but the results are very encouraging, said Sauvageau. To date, for instance, most patients who suffered from types of leukemia at very high risk of recurrence remain in remission.

If things continue to progress at this rate, the number of patients treated could double by the end of 2021, Sauvageau noted.

In their new study, the IRIC researchers found to their great surprise that UM171 is able to act as a veritable “fountain of youth” for blood stem cells. Three days after administration of the molecule, the stem cells presented an epigenome similar to the initial young cord-blood cells, whereas in the absence of UM171, these cells underwent premature epigenome aging.

As a result, patients transplanted with the rejuvenated cells very quickly experience an overall improvement in their quality of life as their blood cell counts are rapidly recovered. Not only does UM171 rejuvenate the cells, they also become more competent at producing an improved immune system. As a result, after six months, most patients no longer need immunosuppressants, normally needed to reverse the negative immunological impact of bone-marrow transplants.

The potential applications of UM171 are multiple, Sauvageau said. For instance, “we could eventually tackle autoimmune diseases and inflammatory diseases such as Crohn's disease or ulcerative colitis,” he said.

For more than 25 years, Sauvageau has been working on finding out how umbilical cord stem cells self-renew in culture and thus improve transplantation for blood-cell diseases such as acute myeloid leukemia, one of the most common blood cancers in adults. After the first promising signs of UM171’s effects in vitro, the molecule began to be tested on animals. Then came experimentation on humans.

“Because there were only a limited number of effective treatments for this type of disease, and because the side effects of UM171 are acceptable, we were able to accelerate the development of clinical trials in humans,” Sauvageau recalled.

The new IRIC study sheds new light on the molecular and epigenetic mechanisms involved when a stem cell is exposed to UM171, and that’s an important discovery, he added. “It's a bit like (succeeding in) putting the cart before the horse since we used the molecule clinically before understanding its mechanism of action.”

It proves that in medicine, basic research can be as valuable as applied research, Sauvageau said. “The history of medicine is full of situations in which effective treatments were applied without fully understanding their mechanisms of action.”

The inconveniences to ongoing research in hospitals caused by the COVID-19 pandemic did not disrupt the UM171 clinical trials, he added, as most of the patients needed an urgent transplant for a life-threatening disease.

“Fortunately, there was little to no slowdown in the protocols,” said Sandra Cohen, a hematologist and adjunct professor of medicine at UdeM, who designed and supervised the clinical trials as head of Maisonneuve-Rosemont’s cord blood stem-cell transplant program.

“UM171 preserves epigenetic marks that are reduced in ex vivo culture of human HSCs via potentiation of the CLR3-KBTBD4 complex,” by Guy Sauvageau et al, was published Jan. 7, 2020 in Cell Stem Cell.

Français
Previous Infants little affected by COVID-19 December 16, 2020
Next A ‘super-puff’ planet like no other January 18, 2021
Share