CRCHUM scientists Christine Vande Velde and Geneviève Matte work on multiple ways to fight amyotrophic lateral sclerosis. For ALS Awareness Month, they give an overview of their research projects.

Nearly 3,000 Canadians are living with amyotrophic lateral sclerosis (ALS), also known as Lou Gehrig's disease or Charcot's disease. Each year, close to 1,000 people are diagnosed with ALS and as many will die from it.

ALS is an incurable neurodegenerative disorder characterized by the selective loss of motor neurons. These nerve cells serve as our internal wiring. They allow us to move our body as needed by enabling transmission of signals to the muscles in order to make them contract.

In people suffering from ALS, the motor neurons gradually deteriorate. These patients eventually lose their muscular function to the point of total paralysis, with an average life expectancy of only 3 to 5 years after diagnosis. In concrete terms, a person living with this rare disease loses the ability to walk, speak, eat, swallow, and ultimately, to breathe.

Complex mechanisms to target and track 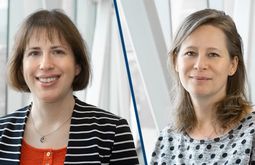 “In our lab, we try to understand what is wrong with the motor neurons from the point of view of their molecular mechanisms," explained Christine Vande Velde, a neurosciences professor at Université de Montréal, researcher at the Centre de recherche du CHUM (CRCHUM) and co-chair of the scientific and medical advisory council of ALS Canada.

"There are two reasons for this," she continued. "First, to identify mechanisms that we can target with therapy, and second, to find biomarkers to track the course of the disease and predict whether it will progress rapidly or slowly."

Over the past two years, her team has found that people with ALS have less of a protein called TDP-43 in the nuclei of their motor neurons, decreasing the level of another protein called G3BP1 and directly influencing the formation of stress granules.

In healthy cells, stress granules are protective structures that prevent damage to ribonucleic acid, or RNA, by environmental stresses such as heat or pollution. If the level of the G3BP1 protein, which is essential for neuronal survival, decreases, the motor neurons are more vulnerable to damage.

Vande Velde is collaborating with CRCHUM researcher Alex Parker, who has provided representative C. elegans models of ALS, and with a company in British Columbia, to exploit this molecular mechanism to identify small molecules to maintain G3BP1 and thus prevent neurodegeneration.

A biobank to validate data

Every year, approximately 100 patients are monitored at the CHUM and, if they are eligible, can enter one of the clinical trials conducted at the CRCHUM, particularly in the Unit for Innovative Therapies (UIT). There, patients are offered advanced treatment options in neurology, including drugs being used for the first time in humans.

“About a year and a half ago, I was able to start an autopsy program, whereby we've been able to collect and store high-quality tissue samples from patients," said Dr. Geneviève Matte, director of the CHUM ALS Clinic and president of the Canadian ALS Research Network.

"We've been helped in this initiative by my colleague, Dr. Alexandre Prat, and his team," she continued. "Already, we've had several patients donate their brains so that we better understand the disease process."

The biobank is crucial for the progress of Vande Velde’s work because it allows her to validate the mechanisms of patients' tissues that she's discovered in her laboratory. “I believe that we have succeeded in establishing a cohesive link between the laboratory and the clinic,” she said.

The complementary nature of the two researchers’ work is particularly evident in the field of their current research.

Thanks to a recent grant from the Canadian Institutes of Health Research, Vande Velde’s team is investigating how motor neurons are affected by environmental stress.

For her part, Dr. Matte is investigating the links between copper exposure and the development of ALS in collaboration with Susan Gaskin, a researcher at McGill University. She and Alex Parker are also setting up a clinical trial for a compound that is showing beneficial effects in an animal model of ALS.

On a day-to-day basis, said Matte, “advancing knowledge and giving hope to our patients is what motivates us. But it takes more than passion. Funding for basic and clinical research is the lifeblood of our project. Unfortunately, we are sorely in need of it.”

To support the work of the two scientists, donations can be made to the Fondation du CHUM specifying it's to help advance ALS research projects.