Four decades after being published in French, the Code Lesperance - by retired lawyer and longtime UdeM secretary-general Michel Lespérance - is now finally available in English. 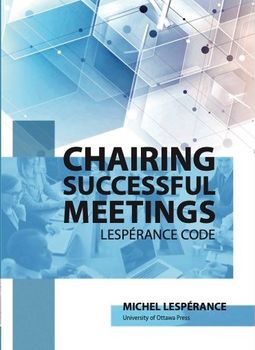 It has helped thousands of organizations and cities hold a proper meeting. Now, 41 years after it first appeared in French, the Guide de procédure des assemblées délibérantes, authored by a longtime secretary-general of Université de Montréal, is finally available in English.

Published today by University of Ottawa Press, Chairing Successful Meetings: Lespérance Code, by retired lawyer Michel Lespérance, was originally published in French in 1980 by the secretary-general's office, then in 2001 by Les Presses de l'Université de Montréal.

Translated by Tanina Drvar, Lespérance's 80-page handbook outlines 101 rules of procedure for holding a meeting, from writing a draft agenda and calling a meeting to adopting a motion by majority and closing a meeting.

We spoke to its 76-year-old author, who has been UdeM's secretary-general emeritus since 2008, about the new English-language edition.

You practiced law from 1967 to 2005 and retired in 2005 after 22 years as UdeM's secretary-general, taking in many meetings along the way. How did the way they were conducted at UdeM change over the course of your career?

The first major transformation was brought about by Rector Paul Lacoste in 1975 when he introduced the function of chairman of deliberations at the University Assembly, thus delegating the task to a person who was familiar with the procedures of deliberative assemblies. Previously, this function had been performed by the rector himself, which could place him in a position where a procedural decision could be judged as not being impartial. The new way of proceeding facilitated the conduct of debates, as it became harder to question the impartiality of the chairman. As it happens, this way of proceeding also went on to become the norm at municipal council meetings across Quebec.

Since the COVID-19 pandemic began in March 2020, meetings have in general moved online on platforms such as Microsoft Teams and Zoom. In your view, has this digital transformation been a positive or negative development?

I believe that such meetings have allowed organizations that need to make decisions through their constituted bodies to continue to be able to do so. In this respect, these IT tools have proven to be essential and indispensable. However, I have personally found that these platforms, unlike meetings where members are present, only allow participants to see and hear other members, whereas human beings, when communicating with each other, rely on those and other perceptions.  In face-to-face meetings, the simple act of being together and being able to exchange a glance or talk to each other during a break can make a big difference in the outcome of a meeting and the atmosphere in which it is held.

Your handbook to holding meetings outlines 101 rules of procedure and offers a detailed guide to making sure meetings are conducted properly. What was your overriding goal in coming up with such standards?

We wanted to improve the functioning of the University's deliberative bodies, the departmental assemblies and faculty councils. With this in mind, I was asked by the then-secretary-general, Juliette Barcelo, to draft a procedural guide. This is why the Guide did not only deal with the conduct of meetings as such, but also with the preparation of these meetings: items to be included on the agenda, preparation of explanatory documents, sending out of the agenda and files submitted for discussion. Two appendices were added to complete the package, providing rules for taking minutes and filing documents related to the meetings.

On the back cover, UdeM arts-and-sciences dean Frédéric Bouchard comments that your book is "suited to ... our country, where British and French traditions co-exist within our organizations." Do you agree?

Absolutely. It must be recognized that in this matter, we in Quebec are more in line with British tradition and the "fair play" that animates it. Whether it's the Morin Code, Robert's Rules of Order or Keer & King's Procedures for Meetings and Organizations, the rules that are proposed aim to achieve a delicate balance between the rights of each member to express himself or herself and the right of the majority to reach a decision that is the best possible.

It took 41 years for your book to appear in English. Why so long?

At the outset, the Guide de procédure was only intended for UdeM. The general secretariat, which was responsible for distributing it to its various bodies, was therefore surprised when outside organizations started asking us for copies. The secretariat was responsible for its distribution for about 20 years, after which the PUM took over, in 2001. The presentation and format were modified and two appendices were added: one on taking minutes and the other on filing documents used at meetings. More than 55,000 copies of the French version have been sold.

The value of the Code has since been recognized, with the Barreau du Québec, among others, making it its supplementary code.

Dean Bouchard and I attended an event in October 2018, at which he told me he's often used the Lespérance Code at meetings he chaired elsewhere in Canada and that his English-speaking colleagues frequently ask him if there's an English version. Would I consider the possibility, he said, invited me to explore getting it done.

Since I had retired from the University in 2005, I made an appointment with the then-rector, Guy Breton, who encouraged me to go ahead and explore the possibility with PUM. Its director, Patrick Poirier, thought it was a good idea and put out the call, and in April 2019 the University of Ottawa Press decided to take up this challenge. After months of effort and a fruitful collaboration, the Lespérance Code was born.