Following a patient with depression by phone or videoconferencing is just as effective as in-person consultations, according to a recent review of studies.

Using telemedicine to care for patients suffering from depression is nothing new; the first study of its acceptability and effectiveness dates back to 1998. However, growing numbers of doctors and other health professionals have adopted the practice in recent years as a way to communicate with patients, particularly in rural areas.

Dr. Jean-François Echelard, a resident at the UdeM-affiliated Marigot family health centre in Laval, has made a contribution to the scientific literature by publishing a review of studies of telepsychiatry, defined as the use of information and communication technologies such as videoconferencing and telephone calls to diagnose and manage depression.

Based on a corpus of 13 studies with an average study population of 135, he surveyed the effects of virtual care, the perceptions of depressed individuals and caregivers, and comparisons with traditional in-person treatment.

Three categories of data were analyzed: depression severity (qualitative and quantitative changes in symptoms), perceptions of telepsychiatry (acceptability, relations with the physician or with other health professionals), and patient functioning (e.g. adherence to medication, appointment keeping). 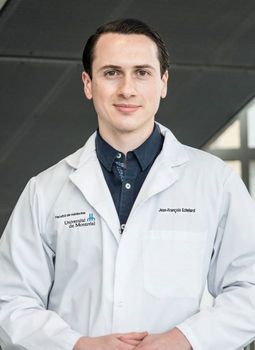 Dr. Echelard’s scoping review, published in late July in the Journal of Medical Internet Research,* found that “telepsychiatry tended to perform at least as well as in-person care regarding improvement in depression severity, patient satisfaction, quality of life, functioning, cost-effectiveness, and most other perceptions and variables.”

Telepsychiatry was found to be effective for both older and younger patients. Health care professionals, including both psychiatrists and general practitioners, also reported high levels of satisfaction.

These results were consistent over time; they were obtained in the studies conducted throughout the 2010s up to the most recent one in 2020.

Some of the telepsychiatry programs studied were culturally sensitive to the target populations. “These programs were specifically designed to treat people with different sociocultural profiles, such as Hispanic and Asian populations or inmates,” notes Echelard.

Increased use of telemedicine during the pandemic

Dr. Echelard uses telemedicine himself to treat and follow some of his patients. He has observed a dramatic increase in adoption among his peers and in his own practice during the COVID-19 pandemic: “We went from a few calls a day to sometimes spending almost the entire day on the phone or videoconferencing with patients.”

While he lacks the distance and data to say whether there has been an increase in cases of depression during the pandemic, he has observed in his own practice that COVID-related restrictions are often mentioned by patients.

Echelard believes further research is needed to continue measuring the efficacy of telepsychiatry, particularly as a diagnostic tool: “On the phone or on a webcam, it can be harder to objectively evaluate a person’s mental state.”

Additional studies are needed to examine factors such as depression variables, perceptions and health care outcomes in a variety of clinical settings, including primary care. “Nevertheless, it is already clear that telepsychiatry is a promising modality of care for patients suffering from depression,” concludes Dr. Echelard.

Jean-François Echelard, “Use of Telemedicine in Depression Care by Physicians: Scoping Review,” Journal of Medical Internet Research, Vol. 5, No. 7, July 2021.

It is estimated that 10% of the world’s population suffers from depression at least once in their lives and 5% in any given 12-month period. The proportions are higher in high-income countries.

Depression is associated with increased risk of premature death due to both the suicide risk and the heavy toll depression takes on physical health: it is a predictor of many illnesses, including coronary heart disease, myocardial infarction, stroke, diabetes and various cancers.