Hero to some, murderer to others, Dr. Henry Morgentaler was the man who changed Canada’s abortion law. 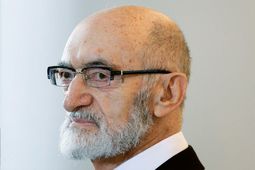 Henry Morgentaler (1923-2013) was a Polish Jew who survived internment at Auschwitz and Dachau before emigrating to Canada. After completing his Doctor of Medicine at Université de Montréal in 1953 and receiving his diploma from the hands of Cardinal Paul-Émile Léger, he was eager to start contributing to Québec society and opened a general medicine practice on Honoré-Beaugrand St. in Montréal.

But, in addition to the usual diseases that general practitioners were called upon to treat, such as measles and chicken pox, more and more women were coming to him asking for help with terminating a pregnancy. At the time, abortion was considered tantamount to murder and performing one could mean life in prison. This was the day of back-alley abortions by quacks like Henri Gauthier, a delivery man who, according to a 1975 article in Le Devoir, performed more than 800 backroom abortions with no concern for hygiene.

For 15 years, Morgentaler resisted helping women faced with the unwanted consequences of free love or, in many cases, rape. Forty years later, he told journalist Florence Meney, now a publicist for Ste-Justine hospital in Montréal, “Right from the start, I knew it was going to be very difficult, that my life would be consumed by this fight.”

The abortions performed at the Morgentaler clinic were medically proven, completely safe procedures. Morgentaler was the first doctor in Canada to perform pregnancy termination procedures developed in Europe, which he had learned during his medical training in Germany and Belgium before coming to Montréal.

At the height of his practice, he was performing up to 15 abortions per day. It was an act of civil disobedience for which he took full responsibility and that led him to being charged, and then acquitted by a jury, in 1973. The Québec Court of Appeal overturned the acquittal in 1974 and sentenced him to 18 months in prison. An appeal to the Supreme Court of Canada was dismissed in March 1975 and Morgentaler served 10 months in prison before being released.

On the wall of his cell in Montréal’s Bordeaux Jail, he wrote: “Love is stronger than hate.” 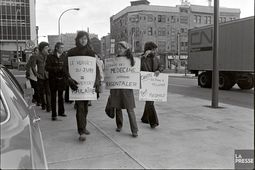 Demonstration by medical students in support of Henry Morgentaler in front of the Montreal courthouse in 1975.

“By confronting the government on the abortion issue, Dr. Morgentaler gave history a push,” said historian Denyse Baillargeon. In her book A Brief History of Women in Quebec (WLU Press, 2014), Baillargeon describes access to free and legal abortion services as the great battle of the feminist movement in the 70s and 80s. “Prosecuted many times, Morgentaler won a number of court cases until in 1988 the Supreme Court of Canada declared section 251 of the Criminal Code [which made abortion a crime] unconstitutional under the Canadian Charter of Rights and Freedoms.”

Morgentaler played a “key role in the struggle for women’s rights in this country,” according to historian Micheline Dumont (French Studies, 1957, 1960), co-author of Quebec Women: A History (Women's Press, 1990). She noted that countless feminists have paid homage to this tireless champion for abortion rights who refused to back down in the face of threats. “I believe he won the legal battle for free and accessible abortion, while women won the political battle,” she said.

“He was a small man, tired but dignified; his memory was sharp and he was still fit when I met him,” recalled Meney, who interviewed Morgentaler for her book on human resilience (Se réinventer, Québec Amérique, 2010).

After surviving the horrors of the Holocaust, in which both of his parents and his sister perished, and then being jailed in Canada for performing illegal medical procedures, Morgentaler was the target of continued threats and insults for decades. His Toronto clinic was firebombed in 1982, and pro-life activists who oppose all abortions, even in cases of rape, compared him to Josef Mengele, the Nazi “Angel of Death.”

In 2003, Morgentaler told The Globe and Mail, "If I help women to have babies at a time when they give love and affection, they will not grow upto be rapists or murderers. They will not build concentration camps."

In Québec, however, the acrimony has died down. The Morgentaler Clinic on Crémazie St. in Montréal is proud to say that it’s all-woman team provides a “calm and respectful environment for all the women who need our services.” Services are available in French, English, Spanish, Italian and Hindi.

Of its founder, the Clinic says: “He continued to fight hard for Canadian women’s right to have access to abortion without restrictive conditions, and in 1988 the abortion law was struck down by the Supreme Court of Canada, allowing women the right to choose for themselves.”

At the Morgentaler Clinic, abortion is free and accessible to all women.