A research team has used AI to produce a list of animal viruses that could jump the species barrier and cause infections in humans.

Until recently, we knew of only two percent of the possible interactions between mammals and viruses, or the “virome.” However, a new artificial intelligence (AI) technique has identified potential new host-virus interactions, increasing the size of the known virome by a factor of 15.

A new machine-learning-based approach to predicting host-virus interactions was applied and 35,000 hours of computer time was used on Calcul Québec computers to analyze data on interactions between a thousand mammals (the hosts) and as many viruses.

After 80,000 potential new host-virus interactions were identified, the network of host-virus associations was paired with a virus genome model to reassess the human infection potential of all the viruses in the database.

The result was a list of animal viruses that could cause zoonoses, i.e. infect humans.

The collaborative international research project was led by Timothée Poisot, a professor in the Department of Biological Sciences at the University of Montreal who is interested in calculating pandemic risks. It was funded by IVADO, the Institute for Data Valorization, and carried out as part of the Viral Emergence Research Initiative. 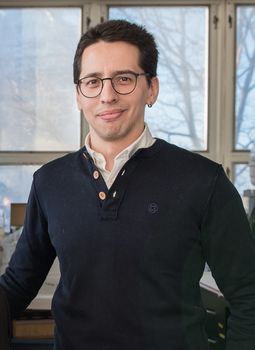 To validate their predictions, Poisot and his team of experts in virology, AI and public health surveyed the literature for prior human outbreaks of the viruses they had tabbed as high risk. It turned out that of the 20 viruses with the strongest zoonotic potential, 11 have in fact made humans ill.

“Some of the viruses really surprised us; we didn’t think they could be transmitted to humans,” said Poisot. “For example, our system calculated that ectromelia, the virus responsible for smallpox in mice, has a ‘very high’ probability of infecting humans, and we discovered that there was indeed an outbreak in a Chinese school in 1987, but it was not listed in any of the databases.”

Overall, the virus families that crop up most often on the high-risk list are bunyaviruses (one of which causes Rift Valley fever), rhabdoviruses (rabies), filoviruses (Ebola) and flaviviruses (dengue fever, yellow fever). “These are all families that are known to present significant zoonotic risk, but the model may enable us to measure the risk within these families more accurately,” Poisot explained.

This predictive research can help guide the efforts of virologists working to prevent zoonoses that could cause future epidemics and pandemics. The list of high-risk viruses can be used to target sampling campaigns on specific species and also on the basis of geographical distribution, as the research team has mapped the results.

“As an ecologist doing biogeographical research, I want to know not only which virus will be compatible with which host, but also where those combinations can be found,” said Poisot.

According to the computer model, the Amazon is the part of the world with the greatest potential for viral mutations. “The results are clear: the Amazon is a hotspot for novel host-virus interactions,” said Poisot. “It’s the region where we find the most interactions that don’t usually occur.”

According to Poisot, these novel contacts can be explained by the lack of data on the Amazonian virome, deforestation, climate change and urban expansion, which increases contact between animals and humans.

Français
Previous Music to our ears: Gift to McGill and UdeM creates hub for collaborative piano in Montreal May 19, 2022
Next Younger generations are changing the face of the labour market May 24, 2022
Share