Ms. Mollen holds an honours bachelor's degree in French studies from UdeM and a master's degree in education. She has dedicated her career to the protection and promotion of the Innu language, first as a teacher, then for several years as director of language and culture at the Tshakapesh Institute. Since the spring of 2017, Ms. Mollen has been a lecturer at UdeM. She also works on the translation and revision of various texts, both from French to Innu and from Innu to French. To date, she has taught the Innu language to close to 245 students at UdeM.

“When I finished my bachelor's degree in French studies here at Université de Montréal,” she said, “it was a dream of mine to come back someday to teach Innu.” 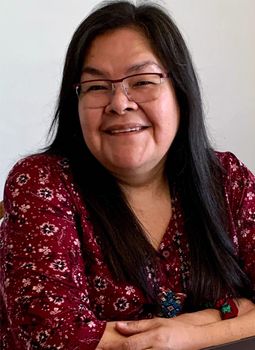 “I would like to congratulate Ms. Yvette Mollen for the excellence of her teaching work and for her inspiring career as an expert on the Innu language," said Marie-Claude Rigaud, UdeM’s associate secretary-general responsible for equity, diversity and inclusion and relations with indigenous peoples.

Caroline Gélinas, the university’s senior advisor on indigenous peoples, added: “This is a new initiative that will become an annual event that will allow Université de Montréal to celebrate its commitment to recognize and showcase the value of indigenous cultures."

Several members of the university community came together to honour the recipient at a ceremony held online due to the current health context. They included Ghislain Picard, Chief of the Assembly of First Nations of Quebec and Labrador, and Mélissa Mollen Dupuis, an Innu artist, activist and media personality. Also present were members of UdeM’s Kwe Kwe Indigenous Employees’ Committee (‘Kwe Kwe’ is an informal greeting used in several indigenous communities in Quebec).

"At a time when the precariousness of indigenous languages across the country is no longer in doubt, it is necessary to recognize the commitment and expertise of our brothers and sisters in order to preserve their culture,” said Picard. “I would like to take this opportunity to thank Université de Montréal for giving indigenous languages this place within your organization. It’s a clear response, in your own way, to the calls for action of the Truth and Reconciliation Commission of Canada.”

Deeply rooted in Montreal and dedicated to its international mission, Université de Montréal is a leading research university worldwide and among the five best French-language universities. With its affiliated schools, Polytechnique Montréal and HEC Montréal, UdeM attracts over $500 million in research funding every year, making it one of Canada’s top university research hubs. UdeM has close to 70,000 students, 2,300 professors and researchers, and an active global network of 450,000 alumni. umontreal.ca/en