Researchers at UdeM's CinéMédias laboratory are trying to measure the therapeutic value of using movies and film clips to help children develop, adults sleep better and seniors deal with dementia.

What if the rhythm of certain movies or film clips was found to help childrens’ and adolescents’ brains develop? What if they could even help alleviate the behavioural and psychological symptoms of dementia in seniors? Or be used to induce sleep in adults?

These are three avenues being explored by researchers at the Cinex program of the CinéMédias laboratory, founded in 2016 by André Gaudreault, a professor in the Department of Art History and Film Studies at Université de Montréal and now headed by associate professor Santiago Hidalgo.

Cinex is an intersectoral research program on the cinematic experience. Started by Hidalgo in 2018, it brings together researchers from a variety disciplines working on measuring the effects of cinema on moviegoers – more specifically, to see how the pace of film clips affects their well-being.

"These three innovative projects have cinema as a common denominator, as well as the fact that they require the engineering of new reception models adapted to clinical populations in complex communication contexts," said Hidalgo. 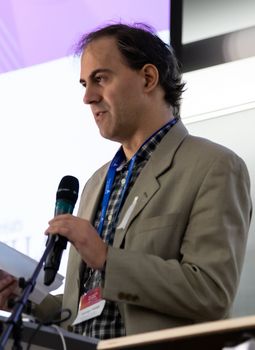 Hidalgo got the idea for the first research project from observing how his own children behaved after watching films and TV shows.

Together with Gaudreault and UdeM psychology professor Sarah Lippé, director of the Developmental Neuroscience Laboratory at CHU Sainte-Justine, Hidalgo is seeing how audiovisual rhythm during film screenings affects the development of children's and adolescents' brains.

Because this is an intersectoral and multidisciplinary project, Hidalgo first had to design a research protocol; he spent the past summer working on it. “There is no pre-established methodology, so we need to have a common protocol that’s adjustable by the different researchers," he said.

As a first step, the team is selecting movies and film clips that, as previous studies have proven, have an effect on emotions and activity. Subsequently, rounds of tests will be carried out to validate this selection so that the methodology can be replicated in other research projects.

Among other things, the project will combine a neuroscientific approach – using electroencephalography – and eye-tracking to capture precisely what children are looking at in order to be able to associate audiovisual stimulation with the emotion they feel.

“Understanding the consequences of the rhythm of different film clips on children's brain development is a complex undertaking," said Hidalgo, the study's co-principal investigator. “But we are hopeful that we can find audiovisual rhythms that will contribute to children's development.”

Personalizing cinematography for seniors with dementia

Hidalgo presented his project at a recent conference, and soon was contacted by Ana Inés Ansaldo, a professor at UdeM’s School of Language Pathology and Audiology who runs the Language, Communication and Aging Laboratory at the Institut universitaire de gériatrie de Montréal’s research centre, the CRIUGM.

Ansaldo wanted to assess the possibility of developing a similar project with seniors. She and Hidalgo agreed to work together to see whether viewing audiovisual sequences could reduce the behavioural and psychological symptoms of dementia among residents of residential and long-term care centres (CHSLDs), particularly with regard to agitation, anxiety and fatigue.

To test this hypothesis, the two researchers designed an interfaculty project involving the CinéMédias laboratory and the CRIUGM where they will measure the influence of the rhythm associated with listening to various audiovisual segments among participants in CHSLDs.

Here again, the team must be exercise their creativity in establishing a research protocol that will be reproducible, while also taking into account the requirements and constraints of the various scientific disciplines and the subjects of the study.

“With people suffering from dementia, researchers cannot use techniques such as electroencephalography or oculometry,” said Hidalgo.

“Rather, their reactions will be recorded on video and then studied in two ways: one team of CRIUGM experts will code the reactions to determine if viewing is beneficial, and another will create a measurement tool that uses artificial intelligence to capture things that are not easily perceptible, such as the effect of colors and areas of the screen that make participants react.”

Cinema to help you fall asleep? 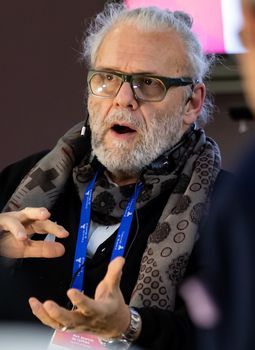 At a time when TV series and films can be streamed to any number of small interconnected screens, a third project aims to study how watching TV and movies before going to bed affects adults’ quality of sleep – and how it affects their dreams.

"Several studies indicate that the blue light emanating from screens can interfere with sleep,” said Gaudreault, co-principal investigator of the study.

“But if the light is dimmed, could letting yourself be carried along by the flow of the material help you fall asleep faster, get a better night's sleep and have better dreams? This is what we want to validate.”

Gaudreault is being supported in his endeavour by Hidalgo and several other colleagues: psychology professor Julie Carrier, UdeM’s assistant vice-rector of graduate and postdoctoral studies; psychology professor Antonio Zadra, director of UdeM’s Dream Research Laboratory; and Vladimir Hachinski, professor emeritus of neurology and epidemiology at the University of Western Ontario and winner of the 2018 Killam Prize in Health Sciences.

“We are also preparing our research protocol and, when the current health context (of Covid-19) allows, we will perform electroencephalogram measurements on participants, some of whom will be in the laboratory and others at home," said Gaudreault.

Following the launch of the Cinex program, interdisciplinary research on rhythm at UdeM's CinéMédias laboratory was given a big boost in 2018 when André Gaudreault was named a recipient of the Killam Prize in the humanities.

At Dr. Hachinski's initiative, the five laureates decided to pursue their relationship with an intersectoral project that could link their respective fields of research through the exploration of rhythm.

Thus was born the first Université de Montréal intersectoral meetings on rhythm -– perceived rhythm and unperceived rhythm - in May and December of 2019. Both were organized in collaboration with university’s vice-rectorate of research, discovery, creation and innovation, headed by Marie-Josée Hébert.

Français
Previous Studying the human genome to understand the risk of autism September 11, 2020
Next A new research centre for public health September 15, 2020
Share