An international team of astronomers succeeds in capturing the spiral motion of dust coming from the binary star system Wolf-Rayet 112.

Using nearly two decades of mid-infrared imaging from the world’s largest observatories, an international team of astronomers has captured the spiral motion of dust streaming from the binary star system Wolf-Rayet (WR) 112.

Analysis of this dusty outflow identifies WR 112 as a highly efficient dust factory that produces an entire Earth mass of dust every year, the astronomers reveal in a study published today in the Astrophysical Journal.

Dust formation in space is typically seen in the gentle outflows from cool stars with a Sun-like mass. It is somewhat unusual in the extreme environment around massive stars and their violent winds.

However, interesting things happen when the fast winds of two massive stars in a binary interact. 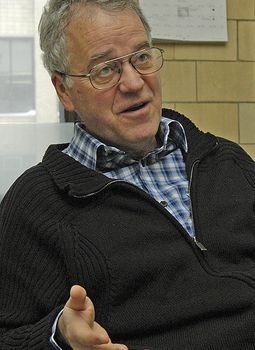 “When the two winds collide, all hell breaks loose,” said Université de Montréal astronomer and research team member Anthony Moffat, who first discovered the dust spirals of WR 112 in 2002 with his UdeM colleague at the time, Sergey Marchenko.

“There’s a massive release of shocked-gas X-rays,” said Moffat, “and a surprisingly large amount of newly formed, carbon-based aerosol dust particles in those binaries where one of the stars has evolved to burning helium, which produces 40 per cent carbon in their winds.”

This binary dust formation process is exactly what is occurring in WR 112. It’s a phenomenon that has been observed in other systems, including WR 104, by the current study’s co-author Peter Tuthill, of the University of Sydney. WR 104, in particular, reveals an elegant trail of dust resembling a 'pinwheel' that traces the orbital motion of the central binary star system.

The dusty nebula around WR 112 is far more complex. For decades, multi-wavelength observations gave conflicting interpretations of the dusty outflow and orbital motion of WR 112. Then in October 2019, after almost 20 years of uncertainty, images from the COMICS instrument on the National Astronomical Observatory of Japan’s Subaru Telescope, in Hawaii, provided the final – and unexpected – piece to the puzzle.

“We published a study in 2017 on WR 112 that suggested the dusty nebula was not moving at all, so I thought our COMICS observation would confirm this,” said the study’s lead author, Ryan Lau, of the Institute of Space and Astronautical Science at the Japan Aerospace Exploration Agency.

“To my surprise, the COMICS image revealed that the dusty shell had definitely moved since the last image we took with the VLT in 2016. It confused me so much that I couldn’t sleep after the observing run – I kept flipping through the images until it finally registered in my head that the spiral looked like it was tumbling towards us.”

Lau showed his work to Tuthill and his student Yinuo Han at the University of Sydney, both expert in modeling and interpreting the motion of the dusty spirals from binary systems like WR 112. “I shared the images of WR 112 with Peter and Yinuo, and they were able to produce an amazing preliminary model that confirmed that the dusty spiral stream is revolving in our direction along our line of sight,” said Lau.

Animated model of the spiral dust nebula around WR 112 (left) and the actual corresponding observations (right).  The φ symbol on the model animation indicates the orbital phase of the central binary, where φ = 0 is at the beginning of its 20-year orbit, and φ = 1 is at the end of its orbit. The animation pauses at each phase that is displayed by the real observations.

Indeed, the team’s model images showed a remarkable likeness to the real images of WR 112. The models and the series of imaging observations revealed that the rotation period of this dusty "edge-on" spiral (and the orbital period of the central binary system itself) is 20 years. The looked drastically different when viewed face-on versus edge-on, reflecting the importance of the viewing angle of WR 112.

With the revised picture of WR 112, the research team was able to deduce how much dust this binary system is forming.

“Spirals are repetitive patterns, so since we understand how much time it takes to form one full dusty spiral turn – around 20 years – we can actually trace the age of dust produced by the binary stars at the center of its spiral,” said Lau. “There is freshly formed dust at the very central core of the spiral, while the dust we see that’s four spiral turns away is about 80 years old.

“Therefore,” he continued, “we can essentially trace out an entire human lifetime along the dusty spiral stream revealed in our observations. So I could actually pinpoint on the images where the dust is that formed when I was born: right now, it’s somewhere in between the first and second spiral turn.”

To their surprise, the astronomers found that WR 112 is a highly efficient dust factory that outputs dust at a rate equivalent to producing an entire Earth mass of dust every year. This was unusual given WR 112's 20-year orbital period; the most efficient dust producers in this type of WR binary star system tend to have shorter orbital periods of less than a year, such as WR 104 with its 220-day period.

WR 112 therefore demonstrates the diversity of WR binary systems that are capable of efficiently forming dust and highlights their potential role as significant sources of dust not only in our galaxy but in galaxies beyond, the researchers believe.

Lastly, they said, these results demonstrate the potential for new discoveries using multi-epoch mid-IR imaging via the MIMIZUKU instrument on the University of Tokyo Atacama Observatory set to begin operations in Chile.

“Mid-IR results from our study notably utilize the largest observatories in the world and set the stage for the next decade of astronomical discoveries with 30-metre telescopes and NASA’s pcoming James Webb Space Telescope,” concluded Lau.

“Resolving decades of periodic spirals from the Wolf-Rayet dust factory WR 112,” by Ryan Lau et al, was published Sept. 16, 2020 in the Astrophysical Journal.