For the first time since 1930, Quebecers will be able to see the moon’s silhouette directly cover the sun, hiding its entire centre and leaving only a ring of the sun visible. 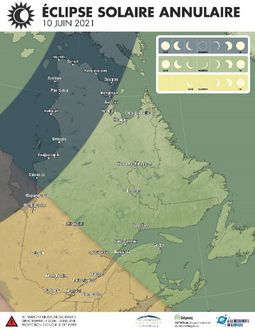 This map shows the different zones where the eclipse of June 10 will be visible in Quebec: in the dark blue region, the eclipse will be annular, while in the green and yellow regions, it will be partial. In Montreal, which is in the yellow zone, the sun will already be eclipsed at sunrise.

A solar eclipse occurs when the moon passes directly between the Earth and the sun, hiding it partially or completely – and get ready, Quebec, it’ll be viewable from here early Thursday morning, June 10.

In southern Canada, the eclipse will be partial, which means the sun will not be completely hidden. In Montreal, the eclipse will have already begun at sunrise, around 5:07 am, and the maximum will be reached at 5:39 am.

At that time, 79 per cent of the sun’s surface will be hidden by the moon. One hour later, at 6:39 am, the eclipse will be over.

“This is the first time that such an eclipse – an annular eclipse – will be observed in Quebec skies since 1930,” said UdeM astrophysicist Nathalie Ouellette, coordinator of the Institute for Research on Exoplanets (iREx).

“Solar eclipses, even partial ones, are rare astronomical phenomena, as they are only visible in a limited area of the globe,” added her colleague Frédérique Baron. “It is truly an event that is worth admiring.”

The astronomical show will be most impressive in a corridor stretching from northern Ontario and Quebec to Siberia, passing through Nunavut, where the moon’s silhouette will be placed directly on the sun, hiding its entire centre and leaving only a ring of the sun visible.

Want to see the show?

The Institute and its partners are participating in several initiatives to encourage people to get up early on June 10 to see the solar eclipse live. 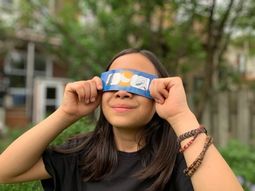 The filter allows for safe observation of the sun.

But precautions must be taken, they advise: never observe the sun directly, during an eclipse or at any other time. Even partially eclipsed, the sun is still a serious danger to your eye’s retina, they warn.

“To observe the sun safely you must use a solar filter that allows only a tiny fraction of the light to pass through … or observe the show indirectly, using a projection mechanism,” said Baron.

In Montreal, more than 4,000 solar filters will be distributed free of charge thanks to a joint initiative of iREx , the Rio Tinto Alcan Planetarium at Space for Life, the Centre for Research in Astrophysics of Quebec, the Observatoire du Mont-Mégantic and the Société d’astronomie du Planétarium de Montréal.

Starting June 1, ou can also get a free information card with a detachable filter that allows you to look at the sun safely at the following locations: the Bibliothèque des sciences at UdeM’s Complexe des sciences at the MIL Campus; the Bibliothèque de mathématiques et informatique in the André-Aisenstadt Building, or to your local Montreal library.

Even without a solar filter, you can observe the eclipse by watching a projection of the sun. Take the Eclipse Challenge, launched by Discover the Universe in partnership with iREx, and learn how to create your own projection system to safely follow the eclipse.

“One might think it’s complicated to create a projection system to observe a solar eclipse safely, but it’s not,” said UdeM astrophysicist Marie-Eve Naud, project manager for Discover the Universe.

“You can make one in less than a minute with two sheets of paper and a sharp object like a pencil, or use a colander or a hollowed-out utensil. You can even forego any material at all, just using our hands.”

Two iREx summer interns, Sarah Thiele and Maude Larivière, have created short video clips (in English and French) to show you how to build an observation tube.

One more thing: a podcast.

Starting before sunrise, a special episode of Les Astrophysiciennes will help orient you, led by Baron and Ouellette and others from Space for Life and Discover the Universe.

The rest is easy: find a spot where the horizon is clear in the east-northeast direction and enjoy the once-in-a-lifetime show.

Français
Previous Head injury and concussion in toddlers: early detection of symptoms is vital June 1, 2021
Next Phantom noises and hypersensitivity to sound: tech to the rescue? June 3, 2021
Share