On the eve of the UN’s COP26 conference in Glasgow, two UdeM anthropologists discuss a new study they’ve co-written that’s become a must-read among climate watchers around the world. 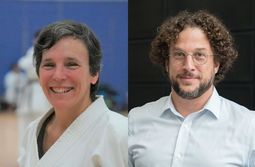 As world climate experts begin to gather in Glasgow, Scotland, for the 26th UN Climate Change Conference (COP26), a provocative Canada-U.K. study co-authored by two Université de Montréal anthropologists is generating a lot of buzz around the globe.

In the study led by McGill University social scientist Christopher Lyon, UdeM’s Ariane Burke and Julien Riel-Salvatore and colleagues at four U.K. universities argue that if the 2015 Paris Agreement is ignored and climate warming not stopped this century, by 2500 “Earth will be alien to humans.”

To illustrate their climate model projections, the scientists include sketches of what parts of the globe will look like by then: a treeless Amazon, a subtropical American Midwest, an Indian subcontinent where rice is harvested by robots in the extreme heat.

The paper was published Sept. 24 in Global Change Biology and reached a wider audience shortly after in a summary published in the academic not-for-profit online news magazine The Conversation, of which UdeM is a partner.

We asked Burke and Riel-Salvatore to expand on the study’s projections and how they could inform debate at COP26.

What motivated you to project so far into the future?

Ariane Burke: Most research and policy for ‘long-term’ climate change uses 2100 as its horizon and has been doing so for decades: we wondered what a hotter world might look like in the coming centuries, in other words we wanted a much better picture of the worlds our children and grandchildren might have to learn to live in, should we miss the Paris Agreement goals.

But 2100 seems a long way away. How can we really know what will happen in the environment by then?

Julien Riel-Salvatore: You have to remember, 2100 also looked very far away in the first Intergovernmental Panel on Climate Change assessment report in 1990, but it’s now within the lifetime of young people today. And in fact, 2100 has no scientific basis as an end date, because the climate will only keep getting more challenging after 2100. So assessments that stop at 2100 give a false sense of closure about global climate change when it is only a waypoint.

Are you the first to offer projections that go beyond 2100?

AB: Of course, scientists have long been aware that climate change will occur beyond 2100, but very few climate models offer projections 100 years or more into the future. The reasons for this include the complexity of the climate system and multiple feedbacks that make it hard to model change on such a long timeframe. What the climate modellers have done for this article is propose extreme scenarios; we mean to shock people and help them imagine what climate change, left unchecked today, could mean for their children, their children’s children and for generations to come. We’re concerned that poorly mitigated long-term climate change will transform the Earth so much that it will be unrecognisable, making it difficult or impossible to sustain the meaningful places and rich ecosystems so important to our development and survival as a species until now.

What do you hope climate scientists and policymakers at COP26 will take away from your work?

JRS: Our findings provide a basis for other researchers to develop better projections of climate change after 2100, and allow policymakers and the public to better understand just how big the impact will be if we aim for zero emissions now and if we don’t in terms of potential climate futures. We hope that our findings help encourage action in terms of zeroing greenhouse gas emissions, to help vulnerable people and locations adapt to the changes they already face.

Have you had much reaction to your paper so far?

AB: The initial paper appeared in Global Change Biology and was included in The Conversation in late September, which has generated over a quarter of a million views. It has also been translated in French. We are very happy that the issues the paper raises are being discussed particularly now, with COP26 getting underway. What we’ve done is use our science to portray scenes of life in the future to help policymakers and the public make sense of the results beyond the graphs or numbers they see in scientific articles and reports. That’s important, and people seem to be listening.

“Our climate projections for 2500 show an Earth that is alien to humans,” by Chistopher Lyon[AB1] [JR2] , Ariane Burke, Julien Riel-Salvatore et al, was published Sept. 24, 2021 in Global Change Biology and summarized in The Conversation on Sept. 26, 2021 (in English) and Oct. 18, 2021 (in French). It was co-authored by colleagues at McGill University and, in the U.K., the University of Leeds, University of Sheffield, University of Oxford and University of York.