In the lead-up to the launch of the James Webb telescope, we look at the scientific objectives of the most powerful space observatory ever sent into orbit. 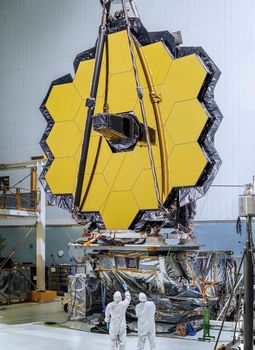 Are we alone in the universe? What did the first galaxies formed after the Big Bang look like? How did the planets in our solar system emerge? The James Webb telescope hopes to find answers to these existential questions.

Set to launch on December 22, the James Webb is the product of the combined scientific prowess of NASA, the European Space Agency (ESA) and the Canadian Space Agency (CSA) – and by extension, Université de Montréal (UdeM). The CSA contributed a scientific instrument and a guidance sensor to the massive observatory and René Doyon, Director of UdeM’s Institute for Research on Exoplanets (iREx) and a professor in the Physics Department, is the principal investigator on the Canadian scientific team.

Together, the components supplied by the CSA, NASA and the ESA form the most complex, accurate and powerful space observatory ever built, one that promises revolutionary discoveries in astronomy.

The unparalleled power of the observatory will help scientists throughout the world scrutinize the distant reaches of the universe to learn more about the composition and inhabitability of exoplanets and study the life cycle of stars.

The James Webb Telescope is the successor to the Hubble space telescope but is more precise and efficient because of the size of its mirror, the range of light it can detect and its location.

These attributes will enable the Webb to study the planets in our solar system and other planetary systems in unprecedented detail. Moreover, the scientific instrument developed by Doyon’s team is designed to analyze many types of celestial bodies, including the atmospheric composition of distant exoplanets.

“What we’re looking for, our holy grail, are ‘biosignatures,’ that is, signs of extraterrestrial life,” explained iREx coordinator Nathalie Ouellette, an astrophysicist who does communications for the James Webb.

She hastened to add that we shouldn’t imagine these signs of life the way they are depicted in science fiction films: “We’re talking about finding signs of biological activity or the signature of certain molecules that we have identified as essential to life, such as oxygen, water vapour, carbon dioxide, methane and ozone. Based on the presence of such molecules, particularly in certain combinations, we may be able to determine that conditions are conducive to the development of life when we explore an exoplanet using the telescope.”

Casting light on the dawn of the universe 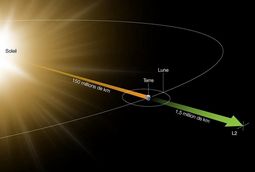 The James-Webb telescope will orbit the Sun at the Lagrange point L2, about 1.5 million kilometers from Earth.

Telescopes are also time machines of a sort. “Looking into space is like looking into the past,” said Ouellette. “Light waves travel so fast that, to the naked eye, they seem to flash instantly from one point to another. In space, however, the distances are so vast that the time it takes light to travel is perceptible.”

The Webb will thus improve our understanding of the development of the first luminous objects (galaxies) over time. Ouellette believes the telescope will also provide insight into the creation of our own solar system.

“We still have many questions about the origins of life in our solar system. We don’t know exactly how we came to be on Earth and how the planets were formed,” Ouellette pointed out. “By studying other systems, stars and planets at various stages of development, we hope to be able to trace our own history and understand ourselves better.”

That is the ultimate goal of the James Webb: to revolutionize our understanding of the universe and, above all, to place the Earth, in all its fragility and uniqueness, in a broader context.