Professor Rafael Najmanovich and his team have applied their modelling of possible variations of the virus responsible for COVID-19 to investigate the Omicron variant. 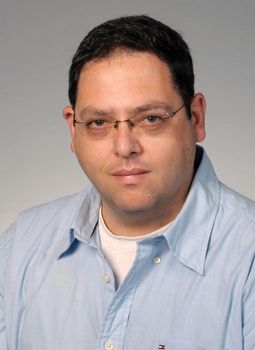 Last summer, a team of researchers at Université de Montréal succeeded in modelling the spike protein of SARS-CoV-2, the virus responsible for COVID-19, and simulating more than 17,000 possible mutations on a computer.

Using their computer-generated model, the researchers have now determined that the Omicron variant is more transmissible but not likely to cause serious health problems in people who have a strong immune response to the variants already present in the population.

Spike proteins are the pointy protusions on the surface of the virus. When they are in the “open” state, the virus is able to bind to human cells and initiate an infection.

“We know that in the original virus the spike proteins are in the closed state 75% of the time and in the open state 75% of the time,” explained project lead Rafaël Najmanovich, a professor in UdeM’s Department of Pharmacology and Physiology and a specialist in molecular design and computational structural pharmacology. “In Omicron, the spike proteins are in the open state a much greater proportion of the time than in any other variant. The protein therefore has more opportunity to bind to human receptors and the virus is more infectious.”

However, according to Najmanovich, the increased transmissibility is accompanied by weaker binding to the receptors that allow the virus to enter human cells. “The virus is evolving in an environment in which many people are vaccinated or have already been infected,” he said. “So it is forced to find mutations that produce immune escape, which means the human immune system is unable to recognize and eliminate it.”

To test this hypothesis, the researchers virtually exposed the Omicron variant’s spike protein to a panel of 77 human antibodies. A net increase in unfavourable interactions was observed in 28% of the antibodies. “The immune escape therefore does not appear to be total but only partial,” said Najmanovich. “We believe that individuals who have a robust immune response, either because they are fully vaccinated or because they have already been infected with the virus, will not present severe symptoms of the disease.”

Najmanovich believes we can extrapolate and conclude that the existing COVID-19 vaccines will be effective in preventing severe illness from Omicron. He cautioned, however, that the tested antibodies were not produced by vaccine-induced immunity but rather by infection with the virus. “Still, we are confident that the results are representative of the immune response from a vaccine,” he said.