Michaël Marsset, who has a Ph.D. from UdeM in physics, was hired to play Professor Mindy’s hand in the Hollywood disaster satire, now on Netflix. 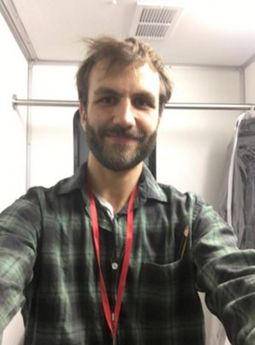 But that isn’t actually Leonardo DiCaprio’s hand you see writing the bleak equations on the whiteboard.

The hand belongs to Michaël Marsset, an expert on asteroids and small celestial bodies who was hired specifically for the scene. Marsset graduated from Université de Montreal with a degree in physics and is currently a fellow at the European Southern Observatory (ESO).

We asked him about his "Hollywood moment."

Doubling for Leonardo DiCaprio’s hand seems like an unusual job. How did you hear about it?

In November 2020, Don’t Look Up’s casting department contacted the director of MIT’s astrophysics department and said they were looking for a hand double for Leonardo DiCaprio. The director forwarded the email to my supervisor, who forwarded it to me. At first I thought it was a joke. Then I thought, this is a great opportunity, so I applied.

They put me in touch with the casting director for doubles and extras, and she asked me to send her photos of my hands and a video of me writing on a blackboard. I sent her a humorous video in which I’m writing an equation on the board and an asteroid falls on my head.

How did you feel when you found out you had been selected?

I was pretty happy!

I think Leonardo DiCaprio is one of the greatest actors of his generation. I was thrilled to get to meet him.

How did the shoot go?

I was on the set, outside Boston, for four days, standing close to an almost-life-size replica of Japan’s giant Subaru telescope in Hawaii. It was quite impressive.

Seeing how a film shoot works was interesting. It’s a drawn-out process. They redo the same scenes over and over again, with cameras filming from different angles. The director is there giving instructions to the entire crew, like a painter working on a masterpiece.

What do the equations you’re writing on the board mean?

They’re equations for calculating the path of a three-dimensional object in the solar system, based on a series of images. They’re taken from a scientific publication by the British astronomer Brian G. Marsden.

Normally the calculations would be done by computer but the director decided to have Professor Mindy write them on the board for cinematic effect.

They hired astronomer Amy Mainzer, a professor at the University of Arizona’s Lunar and Planetary Laboratory, to be the film’s science consultant. She suggested that Professor Mindy do the calculations in front of his students to show them how it’s done.

Is the film’s premise that a comet could hit the Earth realistic?

Fortunately, it’s very unlikely. A comet with a 10-km diameter hits the Earth every 50 million years, on average. The last time it happened, dinosaurs walked the Earth!

NASA has a list of all the objects of more than a kilometre in diameter that are within striking distance of the Earth and at this point none of them seems to pose a potential hazard.

We should probably be more worried about smaller asteroids. NASA and other astronomers are currently looking for objects with a diameter of more than 140 metres, which could cause local destruction.  Object that are less than about 20 metres in diameter are less problematic, because they disintegrate completely in the Earth’s atmosphere. But even there, the shock waves produced when they enter the atmosphere could cause damage.

In 2013, a meteor disintegrated above Chelyabinsk in Russia. When it entered the atmosphere, the friction made it so bright that residents rushed to their windows to see what was happening. As sound travels more slowly than light, only then did the sound waves reach the ground and shatter the windows. Many people were injured. If that happened in New York City, the damage could be extensive. This may be the most serious danger we face. But an event of the magnitude shown in the movie is very improbable.

However, the film signals that it’s really about the response of climate change deniers to the alarms being raised by the scientific community.

Don’t Look Up has become one of Netflix’s biggest hits. It has already logged more than 321 million viewing hours since its release on December 24. Do you think it will help make people listen to what the scientists are saying?