Today, nearly 7 out of 10 UdeM students are women, but it wasn’t always that way. Far from it!

Nearly 7 out of every 10 students at the University of Montreal are women, according to official statistics from the Registrar’s Office for the fall 2021 term. There were 31,121 women out of a total population of 45,507 full- and part-time undergraduate and graduate students, which comes to 68%. The ratio has not fluctuated significantly for more than 25 years.

While the number of women pursuing higher education has increased dramatically since the 1970s, there was a time when there were few women at university, and they were mostly confined to female-oriented programs. 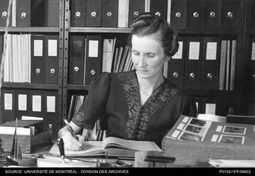 “Marcelle Gauvreau at the Botanical Institute,” January 1939. Gauvreau was the personal secretary to Conrad Kirouac, a.k.a. Brother Marie-Victorin. In 1939 she became the first francophone woman in Quebec to earn a Master’s degree in the natural sciences.

The University of Montreal awarded its first degree to a woman 111 years ago. The recipient was Marie Gérin-Lajoie, who would become a leading figure in the Quebec feminist movement of the 20th century. She graduated in 1911 with a Bachelor of Arts degree from Université Laval à Montréal (at the time, UdeM was a branch of Université Laval in Quebec City).

Nearly 30 years later, in 1939, Marcelle Gauvreau became the first Quebec francophone to earn a Master’s degree in the natural sciences when she graduated from UdeM. She was a pioneer of preschool education in Quebec and the personal secretary of Conrad Kirouac, better known as Brother Marie-Victorin.

But these were rare cases.

According to historian Johanne Collin, professor of sociology and the history of health, “girls were long absent from higher education….They were in ‘female ghettos’ [nursing, medical technology, rehabilitation].”*

In 1957, the University of Montreal had a School of Domestic Science where, as Denise Pelissier puts it in Répertoire numérique détaillé du Fonds de l'École ménagère provinciale (1979), “girls learned the importance and beauty of their three-fold role as wife, mother and housekeeper.” 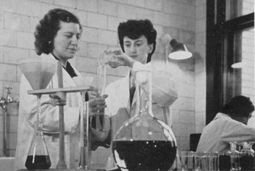 At a lunch-hour debate on “the dynamics of gender relations at the University of Montreal, 1940-1980,” held at UdeM on International Women’s Day in 1989, Collin noted that before the creation of the CEGEPs in 1967, “university admission requirements varied considerably from one faculty to another: some required a baccalauréat ès arts degree and therefore admitted only graduates of classical colleges, while others also accepted students who had completed Grade 11 or 12 in the public system.”

Collin recalled that “until the creation of CEGEPs, the faculties of medicine, law, pharmacy and dentistry were closed to graduates of the public system….And as women had very limited access to the classical colleges, fewer women could attend these traditional, prestigious faculties.”

It was “through faculties, schools and new programs explicitly intended for women—nursing, dietetics, rehabilitation and others—that women gained access to professional education at UdeM starting in the 1940s and 1950s,” Collin said. Those programs generally had lower admission requirements than the traditional professional faculties and some of them were transferred to the CEGEPs after the CEGEPs were created.

It was at that point that the number of women in other faculties began to swell. For example, Collin said, in Pharmacy the proportion of women increased from 15% in 1960 to 60% in 1980; in Optometry it jumped from 8% to 64% in the same period.

* Much of the information in this article is taken from an article in the March 6, 2000 issue of Forum.

Some “first women” at UdeM