Two comic strips raise awareness of the impact of climate change on migration and health. 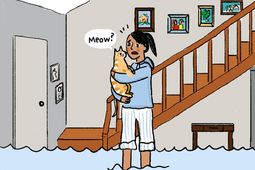 15-year-old Ciara lives on the West Island of Montreal and her house has been flooding in recent years. Tiaho’s family lives on the other side of the world in Kiribati, a Pacific island state that is sinking under rising seas. No one is immune to climate change.

From conference to comic book

The QPHRN had been planning to hold a conference for the general public on climate change, internal and international migration, and their impact on health, but the plans had to be adjusted because of the pandemic.

Instead, a website containing illustrated stories was created to reach the widest possible audience. A wide range of references were added to provide additional information. The goal was to send a message of solidarity and show that no one is immune to climate change; it isn’t just happening somewhere else.

Kiribati Islands in the Pacific will disappear in 25 years 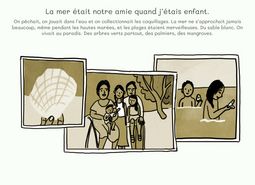 Tiaho, now 55, remembers her childhood: “We fished, played in the water and collected shells. The water never came too close, not even during high tide, and the beaches were pristine. White sands. There were green trees everywhere, palms and mangroves. We lived in Paradise. We used to go to my favorite beach and swim. Families used to cook food there and have picnics. It is gone now, fully submerged in the water.”

Studies show that global warming will cause sea levels at Kiribati to rise by 9 to 28 cm by 2055, leaving the islands underwater. The link between migration and climate change could not be clearer. By showing the precarious situation of an already vulnerable population, the researchers want to underscore the fact that climate migrants currently have no legal status.

Impacts in the North too

Climate change is displacing people in the Kiribati Islands but not only there: some residents have already left Montreal’s West Island for less flood-prone locations. As Ciara tells it, “Some neighbours are leaving the area. I’m not sure I want to—my friends, my school…how could we leave everything? But my family’s anxiety before the Spring each year is getting worse.” Others have decided to stay—a tough choice when their home is no longer insurable and they can’t get compensation for the cost of repairing or abandoning it.

Climate change has multiple impacts on health. “Our drinking water, which has always come from wells, often gets contaminated from the flooding,” Tiaho relates. “This is one of the more serious risks for my family—as many times the well water made my kids quite sick. Unfortunately, this is not unusual.”

There are also many other health problems: “The migrants experience health issues when they are displaced to another country or region, as well as severe anxiety,” the research team pointed out. “It’s really a continuum.”

The two comic strips are posted on the bilingual English-French website Climigrant.

Teachers’ guides could be added in the future. The project team’s plan is to provide supporting materials so that the stories can be used more broadly with students in the classroom or library. They believe it is also important to address feelings of eco-anxiety and offer solutions.

Français
Previous Can feeling the beat improve your well-being? September 14, 2022
Next Goal: Create one of the best entrepreneurial support programs September 16, 2022
Share