The molecular causes of a particular type of food-dependent Cushing’s Syndrome, a rare disease of the adrenal glands, are finally revealed through a Canada-France research project. 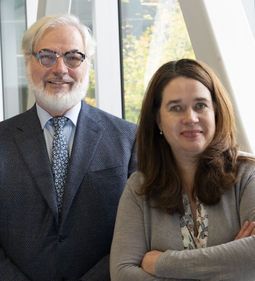 A team of scientists in Montreal and Paris has succeeded in identifying the gene responsible for the development of a food-dependent form of Cushing’s Syndrome, a rare disease affecting both adrenal glands.

In their study published in The Lancet Diabetes & Endocrinology, Dr. Isabelle Bourdeau and Dr. Peter Kamenicky identify in the gene KDM1A the mutations responsible for the development of this unusual form of the disease.

The scientists also show, for the first time, that the disease is genetically transmitted.

Bourdeau is a researcher and a Université de Montréal medical professor practising at the CHUM Research Centre (CRCHUM), while Kamenicky works at the Hôpital de Bicêtre, part of the Assistance publique-hôpitaux de Paris network in France.

Cushing’s Syndrome is caused by the overproduction of cortisol, a steroid hormone, by the two adrenal glands located above the kidneys.

“When the tissues of the human body are exposed to this excess of cortisol, the effects for those with the disease are serious: weight gain, high blood pressure, depression, osteoporosis, and heart complications, for example,” said Bourdeau, co-lead author of the study with Dr. Fanny Chasseloup, a colleague from the French team.

This discovery comes nearly 30 years after food-induced Cushing’s Syndrome was first described in 1992 by a research group led by Dr. André Lacroix at the CRCHUM and his colleagues Drs. Johanne Tremblay and Pavel Hamet.

The form of the disease being studied by Bourdeau and her colleagues is caused specifically by the abnormal expression of the receptors of a hormone named GIP (glucose-dependent insulinotropic peptide), in both adrenal glands of patients. This hormone is produced by the small intestine in response to food intake. For people with the disease, cortisol concentrations increase abnormally every time they ingest food.

The discovery of the genetic mechanism by the French and Quebec teams was made possible through the use of recent cutting-edge genetic techniques on tissues of patients including those investigated by Dr Lacroix at CHUM. Bourdeau was aided by CRCHUM researcher Martine Tétreault during the computer analyses related to the research project.

Earlier diagnosis thanks to genetic analysis

“In general, rare diseases are generally underdiagnosed in clinics,” said Bourdeau, the medical director of the adrenal tumors multidisciplinary team at the CHUM.

“By identifying this new gene, we now have a way of diagnosing our patients and their families earlier and thus offer more personalized medicine. At the CHUM, genetic analysis is already offered in our Genetic Medicine Division.”

In a remarkable demonstration of scientific cooperation, the Quebec and French teams were able to collect and study tissue specimens available in local and international biobanks in Canada, France, Italy, Greece, Belgium and the Netherlands.

This was quite an accomplishment, given the rarity of the disease in the general population. It allowed the researchers to identify the genetic mutations of the KDM1A gene and to determine that the disease is genetically transmitted.

Since 2009, the CHUM has been designated as the adrenal tumors quaternary care centre of the Quebec Cancer Program.