Fungi, specifically those that are “mycorrhizal,” are natural allies of the forest because they improve tree nutrient acquisition. But which of the mycorrhizal feeding strategies yields the greatest tree diversity in a forest: strategy A (ectomycorrhiza) or strategy B (arbuscular mycorrhiza)?

Biologists from Université de Montréal and the Plant Biology Research Institute asked the question and found the answer is neither one nor the other, but rather a combination of the two – proving that there is strength in numbers – or rather, in diversity.

The powerful nourishing capacity of mycorrhiza

“A mycorrhiza, from the Greek myco-, ‘fungus,’ and rhiza, ‘root,’ is a type of symbiotic relationship between a plant and a fungus that has existed since the colonization of land by plants, several million years ago,” explained Alexis Carteron, lead author of the study.

“This positive association for both partners is unquestionably the most widespread and important form of ‘mutualistic symbiosis’ in terrestrial ecosystems.”

Carteron has a Ph.D. in biology from Université de Montréal and is currently working as a post-doctoral researcher in the Department of Environmental Science and Policy at the University of Milan, Italy.

In botany, mycorrhizal fungi have long been known to provide plants with significant nutritional benefits by extending their root systems up to 10 times the initial root surface and enabling them to better absorb water and minerals from the soil. For instance, mycorrhizal fungi are able to dissolve phosphorus in the soil, making it available to plants. In return, the plant provides the fungi with sugar produced through photosynthesis.

“For some time now, there has been growing interest in the important role of mycorrhizal fungi in plant biodiversity,” said the supervisor of the study, Etienne Laliberté, Canada Research Chair in Plant Functional Biodiversity at Université de Montréal. 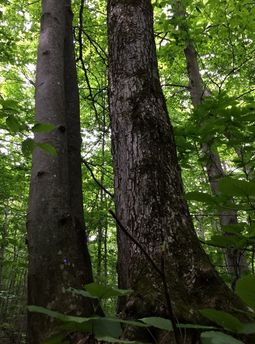 On the right, a sugar maple (form of arbuscular mycorrhizae) cohabits trunk to trunk with a beech (form of ectomycorrhizae).

The two main types of mycorrhizas, ectomycorrhizas and arbuscular mycorrhizas, seem to influence the diversity of tree species in forests in different ways.

Ectomycorrhiza affects about 2 per cent of plant species, mostly conifers in Northern Hemisphere forests. Arbuscular mycorrhiza, the oldest and most widespread form of symbiotic association between fungi and plants, affects 80 per cent of terrestrial plants. The two differ in the way the fungus attaches to the plant’s roots.

Experimental studies of saplings and large-scale observations in different terrestrial biomes (geographical areas that share a similar climate, fauna and flora) also appeared to support this hypothesis. It is challenged, however, by the new study.

Forest trees interact with each other and with mycorrhizal fungi at a very localized level (within a few meters) over periods of several decades. Carteron and Laliberté therefore had to test the hypothesis on forest plots (i.e. an area of a few hundred square metres) in a multitude of forests to determine whether the results could be generalized.

“We analyzed about 82,000 forest plots across the United States and concluded that plots that were very strongly dominated by either ectomycorrhiza or arbuscular mycorrhiza had lower tree diversity,” explained Carteron. “Surprisingly, it was the forests with a mix of both mycorrhizal strategies that had a greater number of tree species. So our results indicate that dominance of any one mycorrhiza, regardless of its type, appears to decrease forest tree diversity.”

While mycorrhizal dominance can be determined at several scales, such as the root system, forest plot and biome, this study underscores the importance of considering the impact of mycorrhiza on ecological processes at the forest plot level. At this scale, the study shows, the coexistence of mycorrhizal strategies can promote plant diversity.

“Sometimes forests with a mixture of mycorrhizal strategies are overlooked by biologists because they’re considered less abundant,” the researchers noted. “However, our study has shown that this is not always the case and these mixed types could, in fact, make up a large part of the world’s forests.”

Such forests may represent a crucial avenue for forest research and management targeting greater ecosystem services: “Combating and adapting to climate change is a good example of the services an ecosystem can provide, because a thriving forest with high tree diversity constitutes a reservoir favourable to climate balance,” Carteron pointed out.

The article “Mycorrhizal dominance reduces local tree species diversity across US forests,” by Alexis Carteron et al, was published in Nature Ecology and Evolution on February 24, 2022.