Racked by worry, Ukrainian-born ophthalmology resident Dr. Oksana Kaminska tells how her world was turned upside down a month ago. 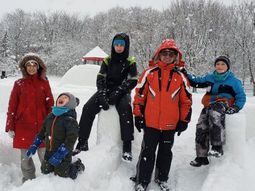 At the park with her boys and her father (February 2021)

Oksana Kaminska had feared her country would be attacked by Russia years before it happened. Twelve years ago, she moved to Quebec to build a new life with her husband and children. But the 41-year-old doctor and ophthalmology resident at the University of Montreal still has family in Ukraine and close ties to the country of her birth.

On the day before the Russian invasion, the youngest of her three boys put out an extra place setting. “It’s for grandpa; he will come,” he told his baffled older brother. A few hours later, on February 24, Roman Meda woke his wife to tell her war had broken out.

“In the first few days, we couldn’t believe it, like most Ukrainians,” Kaminska told us over the phone. “Now it has started to sink in and people are beginning to realize what’s happening.”
Her father wanted to stay in Ukraine “to defend the homes and children” but she prevailed upon him to leave. For the past two weeks, he has been at the place set for him at the table and has been watching over his grandsons while his daughter does her internship in cataract surgery at the CHUM and his son-in-law works in an optometry clinic.

He is sleeping better now and managing to think about things other than the bombs raining down on Lviv, near the town where he lived, and Kyiv, where family members still live. His wife was able to join their other daughter in England.

Kaminska and Meda led contented lives in the western Ukrainian town of Ivano-Frankivsk, which was “as peaceful as any European town.” Both worked in ophthalmology. But deep down, Kaminska was sure Ukraine would be attacked one day. “With a neighbour like Russia, it was inevitable,” she said. “After the annexation of Crimea in 2014, we suspected that Vladimir Putin was planning the next step.”

The sense of foreboding led the couple to emigrate to Quebec in 2010, when they were expecting their second child. Twelve years later, what they feared has materialized. “The unthinkable is happening before our eyes,” she said. “Bombing hospitals, theatres, schools... It’s not a war of army against army, but a war against a population. Had we stayed in Ukraine, our eldest, who will soon be 18, would have been forced to fight in the army. I am studying medicine to save lives, not to kill.”

Rebuilding their lives and working to heal 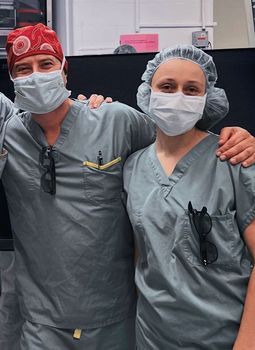 Oksana Kaminska with Dr. Harasymowycz in the operating room (2021)

After coming to Quebec, Kaminska and Meda had to get their diploma equivalencies. Meda chose the University of Montreal School of Optometry. Kaminska is completing her fourth year of residency in ophthalmology at the CHUM. She did the first part of her internship at Maisonneuve-Rosemont Hospital under Dr. Paul Harasymowycz, Associate Clinical Professor of Ophthalmology in the Faculty of Medicine, who is also of Ukrainian origin.

“My work gets me through the tough times,” said Kaminska. “In the operating room, I’m totally focused on the moment.” The rest of the time, she is constantly on Skype and Messenger, checking in with loved ones. On weekends, the family helps out at the Ukrainian church in Rosemont, collecting donations to be shipped to their wounded homeland. “Working as part of a team and feeling you’re doing something useful helps keep up your morale,” she said.

When the guns fall silent, Kaminska plans to return to Ukraine from time to time to teach ophthalmology at the university, as she did on a voluntary basis in peacetime. “The country will have to be rebuilt,” she said. “Everyone will go and help as they can. In my case, it’ll be by transmitting knowledge. I will go and give back what I have learned here.”

If she could have one wish, what would it be? She paused to consider, and then voiced a universal appeal: “I would like to go back in time, to before the war, and start over again. To live in peace.”

Français
Previous Cell division in embryos: not a textbook case of symmetry March 29, 2022
Next How risky is taking medications during pregnancy? March 31, 2022
Share