People have little knowledge and many misconceptions about the Anishinaabe community of Lac Simon in Abitibi-Témiscamingue. The First Nation is largely absent from the history books. To help fill the gap, community elder Jean Papatie wanted to record his nation’s history in writing. He teamed up with community members Alex Cheezo, Lucien Wabanonik, Virginia Dumont and Marlène Jérôme, and two University of Montreal anthropologists—Marie-Pierre Bousquet, Professor of Anthropology and director of the Indigenous Studies program in the Anthropology Department in the Faculty of Arts and Science, and Laurence Hamel-Charest, a doctoral student in Anthropology. Together, they formed a group called Miaji to collect testimonials about the Anishinaabe community’s history and culture. The anthropologists then crafted the data into a narrative to create the graphic novel Odibi: voyage dans l’histoire Anishinaabe de Lac Simon. It was published on March 29 by the Aboriginal publishing house Hannenorak.

A window on the community’s history

Odibi means “root” and that is precisely the purpose of the short 42-page book: to give people a way to learn about their roots. “We wanted to make sure future generations know their own history and also to tell others about it,” said Cheezo.

The novel recounts the history and culture of the Anishinaabeg before they settled in Lac Simon. What was their way of life? How did they survive the harsh winters? How did they care for the ill? How was knowledge passed down from generation to generation? How did their legal system work? And what has happened in the community in the last hundred years?

The novel also contains a small glossary of Anishinaabe words at the end.

“We surveyed local knowledge and ways of doing things, and we presented them in this story,” said Hamel-Charest. “We wanted to dispel prejudices and show that the Anishinaabeg of Lac Simon have a rich culture that is still vibrant today, and it is rooted in a past that young people don’t always know about.”

More than six years of collaborative research went into the making of Odibi. The team had to seek grants, build trust and translate a primarily oral culture into a written medium. “It took time to establish trust among us,” said Bousquet. “We wanted to build sincere relationships, and we wanted to produce something that would last.”

During the writing process, there was constant consultation to obtain the approval of the Anishinaabe members of the group as the book took shape. The Anishinaabeg always had the last word on the narrative. The story was a collective effort and the entire Miaji group is credited as the author.

Telling the story in graphic form 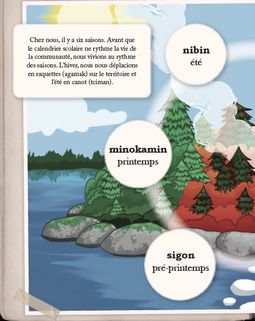 The team decided on a graphic novel in order to reach young people in a way that is accessible and will last.

To translate the ideas into visuals, she brought in as art director Emanuelle Dufour, who had produced a collaborative graphic novel as part of her thesis. She and three other Aboriginal and non-Aboriginal artists (Fabienne Théoret-Jerome, Patrick Lamoureux and Brian Wiscutie) drew the illustrations.

The story is told from the point of view of several families. Reading it feels like leafing through a photo album. Many of the drawings were in fact based on real archival photographs. For example, the cover shows community member Daisy Dumont being carried by her mother, Cécile Brazeau Dumont, in a baby carrier. Choosing among the abundance photographs was no easy task for the anthropologists.

In collaboration with Jrène Rahm, Professor of Education at the University of Montreal, a teacher’s guide is being developed to accompany the story. It will be available for download by high school teachers.

There is also a travelling exhibition based on the research.

All royalties from the sale of the book will be donated to the Lac Simon education council.