At-home blood testing for the monitoring of chronic diseases may one day be a reality.

It all started in the lab – the Laboratory of Biosensors and Nanomachines  in UdeM’s Department of Chemistry. Professor Alexis Vallée-Bélisle, the lab’s director, explains: “In 2015, my lab was working on rapid, inexpensive detection methods that would allow us to detect a wide range of disease markers in a single drop of blood in just a few minutes at home.” While this DNA-based technology seemed promising, Vallée-Bélisle did not fully appreciate its possible clinical applications at the time.

Enter a fellow student from his undergraduate days, Vincent De Guire, now clinical biochemist at Maisonneuve-Rosemont Hospital and clinical lecturer in UdeM’s Department of Biochemistry and Molecular Medicine. De Guire saw the enormous potential of the technology. “Alexis’ strategy solves a number of problems with diagnostic testing and really responds to clinical needs,” observes De Guire. He went on to found Anasens with Vallée-Bélisle.

The technology detects molecules directly in a drop of blood, meaning there is no need to take a blood sample, transport the sample to a central lab, extract blood cells by centrifuging at the lab, etc. The result is huge savings in time, resources and money. 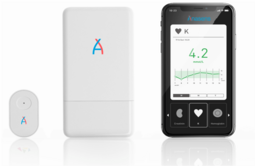 The technology developed by Anasens is seen as one more tool in patient care that will facilitate the monitoring of chronic conditions.

The technology developed by Vallée-Bélisle and his team uses DNA to construct biosensors that detect disease markers. The same detection system can recognize many different molecules. “We often give the example of the glucometer used by diabetics. Right now we don’t have a device like this for other diseases, so we decided to develop one,” explains Vallée-Bélisle. But rather than trying to miniaturize existing technologies, Anasens wants to commercialize a completely new technology, one that is able to detect many different disease markers using a single device.

Many chronic diseases, such as kidney disease and heart disease, require regular monitoring of the patient and therefore many trips to the hospital. Such follow-up is expensive for our healthcare system and hard on patients. “We want to help patients and their doctors,” says Vallée-Bélisle. The technology developed by Anasens is seen as one more tool in patient care that will facilitate the monitoring of chronic conditions.

From idea to finished product

While Vallée-Bélisle is intimately familiar with the world of research, he admits to being out of his element when it comes to transforming his idea into a commercial product. As he notes, “this technology is capable of doing a lot of things, but coming up with a business plan involves all sorts of other considerations.” Support for Anasens has come from a variety of sources at UdeM: the Office of Research Services and Development, Univalor (the University’s technology transfer company) and TransMedTech Institute (Polytechnique’s platform for commercializing discoveries). A grant from TransMedTech, for example, supported five new positions in Vallée-Bélisle’s lab, providing a unique opportunity for these researchers to work on commercializing the technology and immerse themselves in this fascinating hybrid universe.

“We realize how lucky we are here in Québec because we have access to grants for supporting the development of technologies,” says De Guire. Business is often reluctant to invest in these new technologies. The field has been perceived as high risk since the Theranos scandal, in which a U.S. company’s claims to have developed miniature blood testing devices turned out to be a massive fraud. Public funding in the form of grants from Québec’s Ministry of Economy and Innovation and the Natural Sciences and Engineering Research Council of Canada have been instrumental in bringing the technology to maturity.

“When our study was published, we met with about a dozen companies but none of them wanted to take the plunge,” recalls Vallée-Bélisle. “So the solution was to launch our own company within the university environment.”

They took the first step In 2016 by hiring consultants, who were very upbeat about the prospects. So Vallée-Bélisle and De Guire decided to go ahead and in 2020 Anasens was officially launched. The start-up grew quickly, and in April it took second place in Biron’s Phase 2 Competition, giving them access to an accelerator program to help with the launch of their experimental platform. Getting a start-up off the ground comes with its own share of challenges for researchers, one of which is being forced to wear many hats. “It’s much more than just finding investment money,” says De Guire. “You also have to build a multi-functional team and go after boards of directors.”

Results at your fingertips

When the pandemic broke out, most research was put on hold but Vallée-Bélisle pivoted to adapting the technology to detect COVID-19 antibodies. However, Anasens does not plan to continue that work. “The business model for monitoring chronic diseases is much more straightforward and promising. However, our work on developing a COVID-19 antibody test ultimately benefited Anasens and my lab because it allowed us to maintain our research activities and improve our prototype.”

Patients will have to wait two or three years before getting the chance to use the device because the technology still needs to mature. Clinical validation of the prototype has begun but more investment and testing are needed, not to mention approval from Health Canada. But in the long run, Anasens hopes to make a difference in the lives of patients and doctors. “I am so impressed by Alexis’ determination to see this project through to completion,” says De Guire. “So many discoveries are made in basic research but often they aren’t translated into concrete applications.”

How the technology works

The devices being developed by Anasens rely on a technology that Vallée-Bélisle has been developing for many years. It basically uses DNA as a signalling system, “kind of like a bar code” in his words. Each electrode in the device has a short DNA sequence on its surface that can recognize a complementary sequence of DNA that has been added to the blood sample. These two complementary sequences combine to form the double helix we are familiar with. The DNA sequences added to the drop of blood contain a substance that can be easily detected by the electrodes. The interaction between this DNA and the disease marker alters the DNA’s ability to form the double helix and thus produces changes in electrical current flow. It is these latter changes that the device detects and quantifies.