A waterproof coat keeps you dry when it rains, but did you know it can also contaminate the environment? That’s because the fabric contains per- and polyfluoroalkyl substances (PFAS) – so-called  “forever chemicals” that take forever to decompose.

And now those manmade chemicals are turning up in farmers’ fields.

Professor Sauvé's team characterized PFASs in past and present organic waste materials spread on agricultural fields in France and found the highest amounts of these substances in urban samples, with the compounds changing over time.

Because of their useful surfactant properties, PFAS have long been mass-produced for non-stick coatings, water-repellent fabrics and fire-fighting foams. But with these “forever chemicals turning up in the environment, concerns have been raised about their toxicity.

Banned in many countries 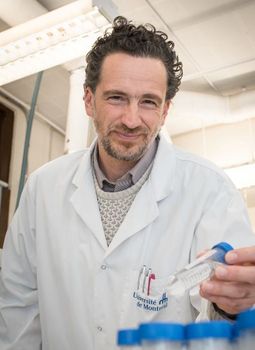 Although production of the PFAS of greatest concern has been banned or voluntarily discontinued in many countries, in nature these compounds persist. And that worries scientists like Sauvé, who decided to study the issue

“Humans and livestock can ingest PFAS and excrete them in their feces, or the compounds can leach into domestic sewage and end up in treated municipal wastewater effluent,” the UdeM researcher said. “When these residues are applied to agricultural fields as fertilizer, PFAS could contaminate groundwater and bioaccumulate in food crops.”

With colleagues at the French National Research Institute for Agriculture, Food and the Environment (INRAE), Sauvé and his research team set out to comprehensively characterize  several classes of PFAS in organic residues – including livestock manures, urban wastewater sludge and composts, and industrial waste – applied as fertilizer on French farmland.

The researchers selected 47 samples of organic derivatives meant to be spread on fields,  collected in France from 1976 to 2018. High-resolution mass spectrometry revealed PFAS that had previously gone undetected. More than 90 percent of the samples contained at least one PFAS, and the team detected up to 113 compounds in a single sample.

Urban samples from a few years ago contained higher levels of historical PFASs, while today's samples were dominated by emerging compounds called "fluorotelomers," which could degrade into more persistent PFAS in the environment, the researchers say.

“This study was conducted with samples from France since several French environmental and agronomic research observatories  – INRAE, SOERE PRO and CIRAD – are conducting long-term monitoring of agricultural recycling of waste products,” said Sauvé.

“They’ve had access to a very valuable bank of samples collected over decades to conduct this type of analysis. We can assume that the situation in Canada is comparable, but we can't say for sure because of the lack of studies.”

However, PFAS have already been detected in the Canadian environment: in river water and drinking water, in fishery products and in domestic wastewater. Some older perfluorinated contaminants are present in the blood of over 95 per cent of Canadians, Health Canada says.

These substances can travel far geographically and bioaccumulate in food chains, which explains why they’ve even been found in wildlife in the Canadian High Arctic, the country’s northernmost ecoregion.

For 15 years now, Canada has been phasing out those perfluorinated substances of greatest concern by limiting their use. But while Canadians’ exposure to older substances has declined, existing levels of emerging PFAS remains poorly documented.

''Target and nontarget screening of PFAS in biosolids composts, and other organic waste products for land application in France,'' by Sébastien Sauvé et al, was published Oct. 20, 2021 in Environmental Science & Technology. Funding was provided by the National Environmental Research Alliance, the Natural Sciences and Engineering Research Council of Canada, the Fonds de recherche du Québec - Nature et technologies, the Canada Foundation for Innovation, the Strategic Environmental Research and Development Program, and the McGill University Doctoral Award in Engineering.

Français
Previous Get moving for good mental health! October 18, 2021
Next An UdeM alumna named one of “Canada’s most powerful women” October 25, 2021
Share