Swamps and bogs have a foul reputation but they provide numerous ecological services. Audréanne Loiselle, winner of UdeM’s 3-Minute Thesis competition, is determined to spread the word. 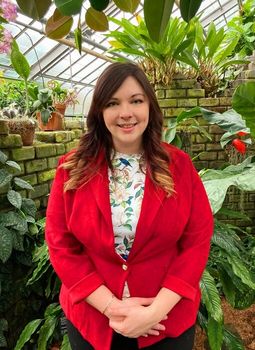 Sticky heat and humidity, foul-smelling mud, clouds of biting insects—this is what usually comes to mind when we think of swamps. Certainly not an idyllic place to spend a summer vacation! Who hasn’t looked at a swamp and thought, if only that stagnant water and all those mosquitos could magically disappear and be replaced by crystal-clear water and no bugs! We forget the importance of these unique environments and the many essential ecological services they provide.

Audréanne Loiselle is studying wetlands for her Ph.D. in biological sciences, under the supervision of Stéphanie Pellerin. Loiselle hadn’t set out to become an expert on wetlands. “I was thinking about studying animals so I had my sights set on zoology,” she said. “But then I took some courses with profs who were so excited and passionate about plant and forest ecology. After a few research internships, I discovered Stéphanie Pellerin’s work at the Plant Biology Research Institute (IRVB) and wanted to join her team.”

87% of wetlands have disappeared

Since the 18th century, the world has lost 87% of its wetlands. The greater Montreal area has seen 80% of its wetlands vanish. While we often blame residential development and the proliferation of condo towers, highways and the like, it is actually agriculture that has caused the greatest losses in Quebec.

We often have fewer qualms about destroying an ecosystem we don’t know much about. We think about preserving forests because they are carbon sinks and important sites of biodiversity, but we often forget about the many services provided by wetlands.

Wetlands are our planet’s kidneys

Wetlands are like giant filtering systems. As Loiselle explained, “Suppose you live near a lake. Most of the houses bordering the lake will have a septic tank. But the lake also has its own natural filtration system in its shoreline wetlands. As water passes through them, nitrogen, phosphorus, nutrients and pollutants are removed. So the lake will be less polluted if there are wetlands along much of its shore.”

Wetlands also allow suspended matter in the water to settle to the bottom. If there is significant shoreline erosion, wetland plants will slow the flow of currents and promote sedimentation.
“Wetlands are like our planet’s kidneys,” Loiselle said. “They are complex, effective and completely free filtration systems that humans have basically replaced with wastewater treatment plants that cost a fortune.”

Wetlands reduce flooding, and so much more!

There are different types of wetlands and each has its own unique set of benefits.

Loiselle is studying three types: bogs, tree-dominated swamps (forest swamps) and shrub-dominated swamps (shrub swamps). Bogs are giant sponges. During wet periods, they soak up water and help prevent flooding. They then release the water into the surrounding environment during dry periods, reducing fluctuations in water levels. Bogs also support a rich diversity of birds, singing insects and zooplankton (microorganisms that live in the water). By comparison, forest swamps support a greater diversity of plants and shrub swamps are especially good habitats for fish.

What wetlands are most important to preserve?

Since 2017, Quebec’s Bill 132 has required regional county municipalities (MRCs) to draw up management plans for wetlands and water bodies on their territory. These plans use calculations of ecological services in order to choose which wetlands to prioritize, preserve and restore.

Loiselle’s research will serve to support this planning process. “I’m exploring the characteristics of different types of wetlands,” she explained. “If you want to preserve the greatest possible biodiversity, you can’t choose just one type of wetland because you’re going to lose things that are important. But I wouldn’t necessarily choose the sites that provide the most ecological services. I’m looking at how each wetland functions and how a complementary network can be developed that optimally conserves ecological services.”

Flooding has increased dramatically in the past 30 years due to climate change. The extensive flooding in Laval in 2017 is just one example. With the increasing pace of climate change, we cannot afford to lose wetlands and the services they provide.

“Imagine a hospital working at 13% capacity,” said Loiselle in her winning presentation in the University of Montreal’s 3-Minute Thesis competition. “Now imagine it being hit by a pandemic. For wetlands, the pandemic is climate change.”

“I feel it’s really important to have opportunities like 3-Minute Thesis to communicate my love of wetlands,” she said. “These ecosystems are underappreciated because they aren’t always pleasant to visit. People can have a negative view of wetlands—especially developers, who see them as an obstacle to building their condo towers. We really have to make wetlands, the ecological services they provide and the need to protect them part of mainstream thinking.” 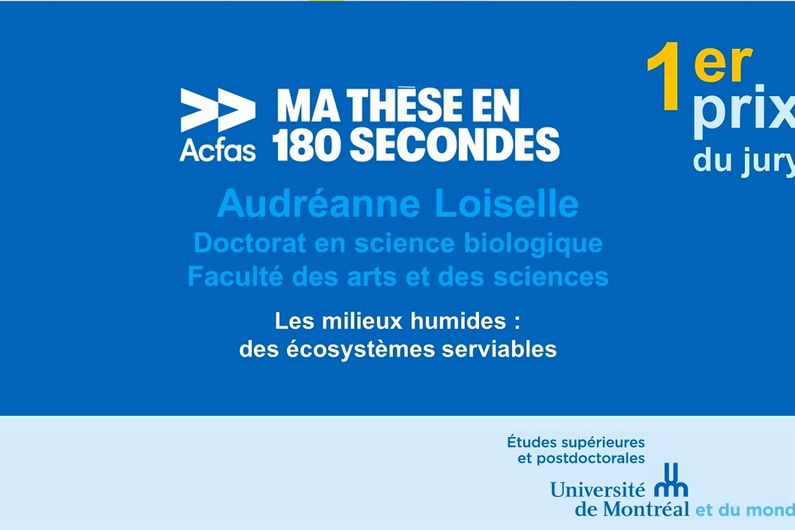 Français
Previous Seniors living alone aren’t as socially isolated as you might think April 20, 2022
Next How machines behave April 22, 2022
Share